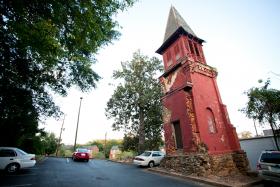 The Beatles made the crosswalk on London’s Abbey Road famous…..and R.E.M. did the same for St. Mary’s Episcopal Church in Athens.

“Michael has said in interviews that it’s a place that only students could have loved and it’s kind of been romanticized beyond belief,” says David Ferguson, an Athens-based musician-turned-writer.

Stipe, Peter Buck, Mike Mills and Bill Berry held their first concert in the church and it played a major role in the band’s early history.

“It’s a beacon of our past, I wish the whole church was still there, but those things happen when developers come through,” says Ferguson.

The church has been torn down, but its steeple remains next door to Nuci’s Space, a “musicians’ health and resource center.”

“When you think of Athens, Georgia, you think of music.  And I see that steeple and I see a beacon standing up in the air that just says ‘This is who we are,’” says project manager Marc Tissenbaum.

Tissenbaum is hoping to raise $250,000 dollars within the next two months to renovate the structure.

“It is stable and it will not be torn down, but we do want to take it a step further.  We just want to have a nice space for the community,” says Tissenbaum.

A number of Athens-based musicians have chipped in to this campaign, including Kate Pierson of the B-52s.