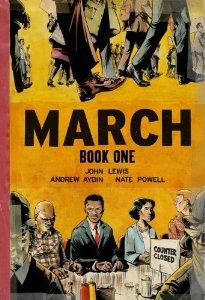 Lewis says a comic book played a big role in his life, and now he has written one.

Back in 2008, one of Lewis’s campaign aides suggested he write a comic book. Andrew Aydin said he was planning to attend Comic-Con, and Lewis says that drew some laughs from fellow staffers. “And I said, ‘Don’t be silly,’” said Lewis.  “Comics played a major role in the civil rights movement. Back in 1957, and I remember it very well. When I was 17,  comic book came out, little comic book came out, sold for ten cents, and it told the story of Martin Luther King, Jr. and the Montgomery bus boycott.”

Aydin, who is from Atlanta, was persistent, and Lewis says they ended up working together for three years to tell the story of Lewis’s life, life, the civil rights movement, and bringing the story all the way to Barack Obama’s election to the U.S. Presidency.

“And we had to make the decision that this was too much for one book,” said Lewis. “It’s hard to be concise and tell the whole story. But we don’t want to lose the attention of people.”