The city of Atlanta has lost thousands of low-cost rental units from 2010 to 2014, according to a report published by the Federal Reserve Bank of Atlanta.

At the same time, a growing number of households are spending more than 30 percent of their incomes on housing, according to the report, which also examined seven other cities in the Southeast.

“We’re going to be a very different city if it continues the way it is,” said report co-author Dan Immergluck, professor of city and regional planning at Georgia Tech.

“We’re going to lose our housing options for working folks, for regular folks and really become kind of a playground city for affluent folks,” he said. 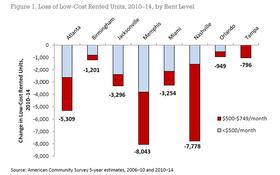 “The takeaway is we need to do something or we’re going to have really an unsustainable city,” Immergluck said.

There a number of factors that have contributed to the decline in low-cost units including the abandonment of blighted properties in distressed neighborhoods and also the increase in luxury apartment development, he said.

He estimates 25,000 new luxury apartment units have been built over the past four years, and that these type of units can drive up prices, creating competition for affordable housing.

The decline in affordable housing has particularly affected people with disabilities and seniors in the metro Atlanta area, said Shelly Simmons, executive director of the Statewide Independent Living Council, an organization that advocates for peoples with disabilities.

She says the lack of affordable units has caused people, including herself, to live outside the city.

“We’re being segregated from the general population,” she said. “We think that housing should be inclusive whether you’re 2 or 92. Everybody should have the right to live where they want to live.”

This month, the Atlanta City Council passed an ordinance that would require developers building multifamily homes who receive public funding to set aside up to 15 percent of housing for affordable units. The ordinance goes into effect in July.