A USA Today report says new patients at the Atlanta Veterans Administration Medical Center are waiting nearly two months to receive care, which is among the worst in the U.S.

Data obtained by USA Today showed the Atlanta VA had one of the longest wait times in the nation. The information from the U.S. Veterans Administration shows on average patients at the center wait more than 56 days to receive care.

In response, the Atlanta VA says its current wait times are “unacceptable, and we are engaging in several different initiatives to improve access.  This includes expanding sites of care at Oakwood and Fort McPherson and hiring additional providers.  Additional appointments have already been added to Primary Care Physician schedules and Saturday clinics are being added.”

The statement released by the center goes on to say, “Access is a challenge and we are actively working to expand available appointments, increase extended hours for clinics and hire additional providers … As with other VA medical centers across the country, we are in the midst of a data validation effort to make sure all information related to patients waiting for care is accurate.”

WABE contacted the U.S. Veterans Administration to try and obtain the data but did not hear back by deadline. According to the report, nationwide the average wait time to receive an appointment is 27 days. That’s double the amount of time veterans are targeted to receive care.

In April of 2013, reports by the VA’s Inspector General linked three veterans’ deaths to mismanagement in the Atlanta VA’s mental health programs. Later, another death was discovered.

In May, a new director for the center was appointed.

In the same vein as the USA Today findings about patient wait times, a review of the Atlanta VA Medical Center from the Office of the Inspector General at the Veterans Administration found that the Atlanta VA ranked near the bottom on a number of performance measures used for comparing facilities within the VA system.

The review used data collected during the week of November 18, 2013, to rank the Atlanta VA against 127 other VA facilities.  The report itself is dated March 12, 2014.

As the following graphic from the report indicates, the Atlanta VA facility ranks in the bottom 20% of all VA facilities on performance measures such as: 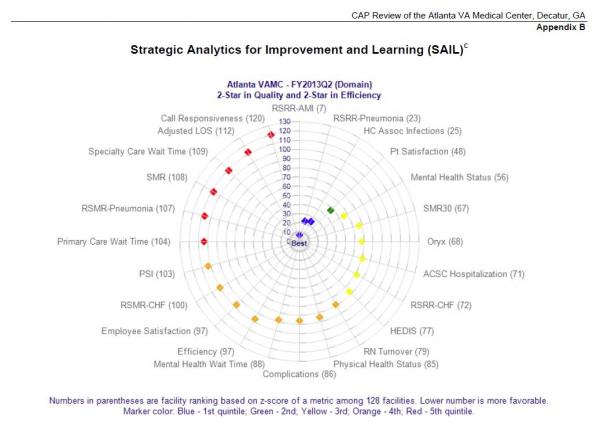 Here is a list of the specific measurements that were used for these rankings, taken from the same report: 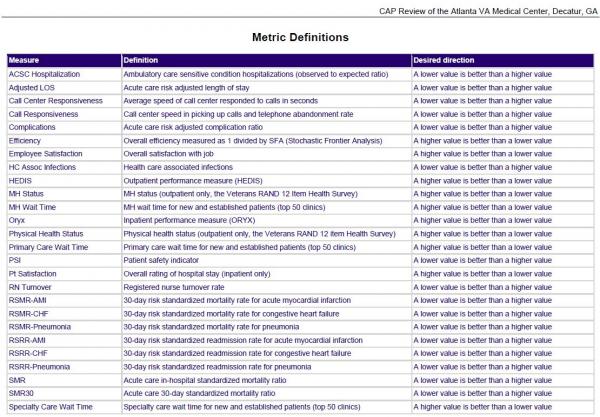