A new report released by the Robert Wood Johnson Foundation and the University of Wisconsin ranks Forsyth County as the healthiest in Georgia. The report ranks the county first out 159 counties for health outcomes in the state.

According to the report, Forsyth County is doing better than the state average and the best performing counties in the country in terms of the number of premature deaths. The county is also performing well on health factors such as the percentage of physical inactivity and the number of sexually transmitted infections. Kate Konkle is a researcher at the University of Wisconsin Population Health Institute.

“Their adult obesity rate is 23 percent, so certainly not a great number. Although no county in the country has a great adult obesity rate, but it is lower than the state average and it is lower than our national benchmark, which is good news. They also have a fairly good adult smoking rate at 14 percent, so again certainly room for improvement but it looks like lots of good work has already been going on.” 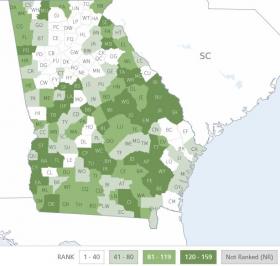 Forsyth County officials believe the county’s park and recreation system contributed to the positive health ranking. Jodi Gardner is a spokesperson for the county.

“We offer a lot of ways for residents to enjoy the outdoors. We’ve got great parks, trails. We’ve also got recreation centers with fitness equipment and basketball gyms and certainly that could be a contributing factor that helps our community stay healthy.”

In general, counties in the metro area faired better than many rural counties in the state. But out of 10 metro Atlanta counties, Clayton County scored the worst for health outcomes. The report ranked the county 42. The county had a higher number of premature deaths and percentage of babies with low birth weight than the state average.  It also had a high percentage of adult obesity and a higher number of sexually transmitted infections than the state average. However, the county’s ranking is better than more than 100 other counties in the state. WABE contacted Clayton County but did not receive a response by deadline. Clay County in Southwest Georgia was ranked the least healthy county in the state in terms of health outcomes.