All eight Georgia Republicans trying to get the party’s U.S. Senate nomination share the same view on the Affordable Care Act: they want it repealed. But on foreign policy, the candidates have different views. Those differences were on display for the 600 people who attended a debate in Kennesaw this weekend.  Aleck Ragsdale reports. 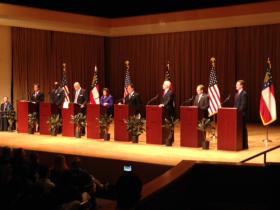 “We are the strongest nation on the face of the Earth. We have an obligation not just to protect our own people, but every independent, liberty loving individual across this globe”.

Whatever conflict the nation gets involved in both Congressman Paul Broun and former Secretary of State Karen Handel said we need an exit strategy.

Broun: “If we ever get involved in a conflict, we need to have that strategy where we can go, we can win that war, and come home immediately”.

Handel:  “Any time we are going to engage around the world, we need to have a clear strategy of what is the end game. That’s why when President Obama was articulating his so-called strategy to go in with military intervention to Syria, I spoke out and said absolutely not”.

Another businessman, Eugene Yu used an analogy of giving out money in your community when you can’t even pay your own mortgage.

“We are in trouble. We don’t have money and can’t spend like we used to. So therefore let’s take care of us first then we’ll worry about our neighborhood”.

If the US is involved in Middle Eastern conflict Congressman Jack Kingston wants US forces to be as strong as possible.

“I don’t want our soldiers, sailors or airmen to ever have to fight a fair fight. I want them to be the best trained and best equipped military that there is and I want every conflict that we go into for the outcome to be certain”.

Minister Derrick Grayson, used the question to lash out against domestic surveillance and at Congressmen Kingston, Gingrey, and Broun.

“Our foreign policy won’t be much different from our domestic policy if we allow them to continue violating our Fourth and Second Amendment rights which have been under attack forever and a day”.

The next debate will be on Feb. 22 in Gainesville. The state primary election is May 20.