With Black Friday here, retail and marketing experts are predicting a positive economic outlook for Georgia retailers this holiday season. At 8.7 percent in October, Georgia’s unemployment rate has dropped a percentage point from the same time last year. That dip will benefit the state’s retailers according to Randy Stuart, an assistant marketing professor at Kennesaw State University. 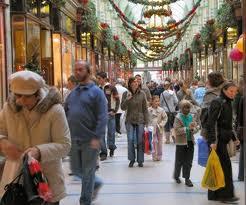 “That’s a big drop, and I think we’ve gone through so many years of things being so difficult financially. I think people are going to say things are better, I feel better about holding onto my job, and that they’re going to be more positive and spend a little bit more.”

And because of the improving economy, the Georgia Retail Association is predicting a four percent sales increase from last year. Georgia Retail Association spokesman, John Fleming says, “We really look back to August, which is the back to school shopping season, as a good indicator of how things are going to continue through the rest of the year, and most major retailers reported increases of between four and five percent, so right now we’re expecting that trend to continue right on through the end of the year.”

Fleming says he expects both small and large retailers to experience stronger sales.