For Valentine’s Day, here’s a story about a long separation, where – finally – the boy and the girl are united.

This is a story about plants.

First, a very short botany review: Most plants are both male and female. Their flowers have both parts. But some kinds of plants aren’t like that; there are males with male flowers, and females with female flowers.

The dwarf sumac – its scientific name is Rhus michauxii – is one of those plants where the individuals are either male or female. And the bushy-looking plant is incredibly rare. It grows in a handful of Southern states, and is listed as endangered both by the state of Georgia and the federal government.

He says the dwarf sumac in Georgia has dwindled so much, there are only two wild populations left in the whole state. 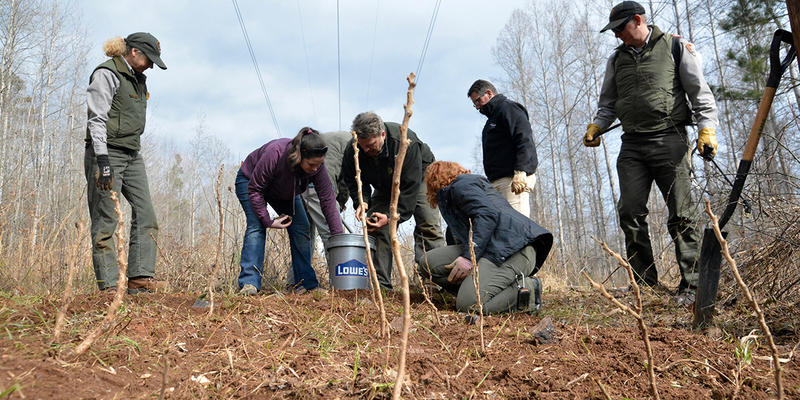 So now Moffett and others are bringing the males and females together in the Chattahoochee River National Recreation Area. There are a couple other spots where they’ve also planted the sexes together. And these plants can send up shoots from their roots, so the all-male and all-female populations weren’t completely barren.

They’re not putting the plants in  a dark glen hidden away in the woods somewhere. These plants like sun. It’s another reason why their populations have shrunk; wildfires used to come through and open up the forest floor to light, but those fires are mostly suppressed now. So plants that relied on the fires have fewer and fewer places to grow.

What’s replaced fire in the habitat, in some ways, is electrical transmission lines. Utilities keep trees from growing too close to them, so the ground around them is clear and open.

“In some parts of the landscape, that’s about the only open areas that are left,” Georgia Power biologist Jim Ozier says. “Our power line rights of way, which must be maintained open to ensure reliability of electricity supply, turn out to be very good habitat for plants.” 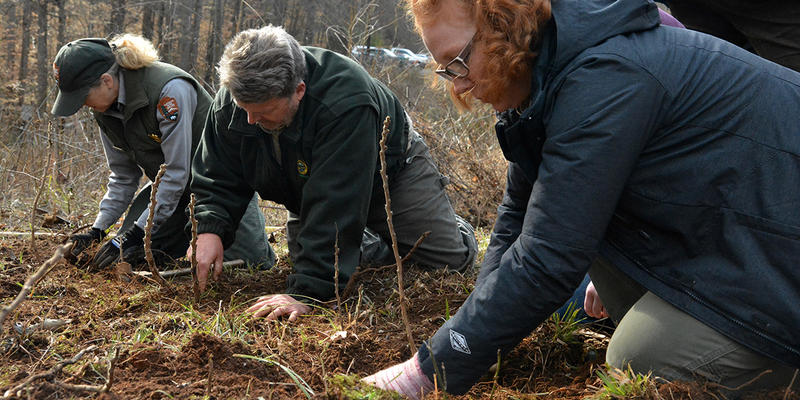 The Chattahoochee River National Recreation Area in general is a good place for plants. It has some of the highest plant diversity in the entire National Park System, park biologist Allyson Read says.

“That’s because of where we’re located geographically,” she says, where plants from the coastal plain, the Piedmont and the Appalachians all come together.

It’s a nice bonus that it’s a relatively urban park. Compared to a park like Yellowstone, it’s close to a lot of people.

Read says she’s happy to have the dwarf sumac added to the mix at the Recreation Area, even if it’s not a “sexy” plant.