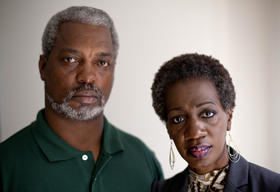 Update: NPR reports that Dante Martin has been sentenced to six years in prison for manslaughter and felony hazing.

A former Florida A&M University band member is set to be sentenced after being convicted last year of manslaughter and felony hazing in the death of a drum major.

On Friday, Dante Martin faces more than 20 years in prison in the beating death of 26-year-old Robert Champion during a brutal hazing ritual aboard a parked bus following a football game. Twenty-seven-year-old Martin was convicted in October during a trial in which prosecutors said he was the ringleader of the ritual.

He was the first to stand trial in the November 2011 death of Champion, who was from Decatur, Georgia. The case brought into focus the culture of hazing in the band, which was suspended for more than a year while officials tried to clean up the program.