A week after the deadly attack on its office, the French satirical magazine Charlie Hebdo​ published a new issue. It sold out immediately.  The cover featured yet another cartoon image of the prophet Muhammad -this time shedding a tear.

Satirical images of the Prophet have angered many Muslims.  But perhaps all of us have at some time been upset by satire.  So, should there be limits? 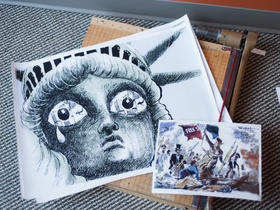 (Note: Luckovich’s cartoon in response to the “Charlie Hebdo” attack can be seen by clicking here.)