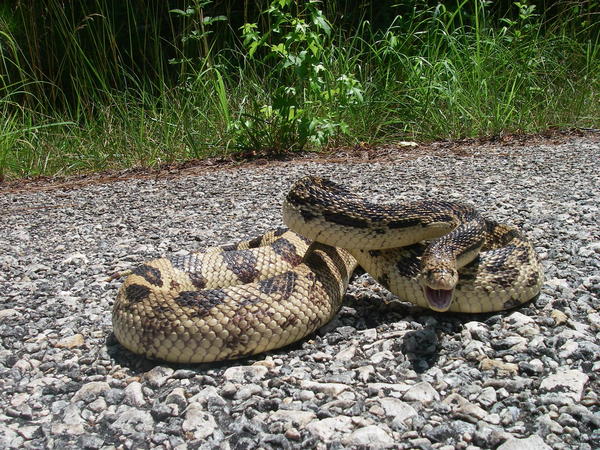 In the woods of north Georgia, there’s an animal that has barely been studied.

It’s a big one: a snake that can get up to 6 feet long and makes a loud noise when it’s scared. It’s called the pine snake, and scientists wonder if it’s truly rare, which could trigger strict protections, or if it’s just rarely seen.

Zach Felix stands at the top of a hill and looks down into a tangle of kudzu and thorny, wild raspberry bushes. He’s listening to a radio signal that’s coming from a snake. It beeps every second or so.

Felix is a professor at Reinhardt University in Cherokee County who’s trying to learn more about the mysterious lives of pine snakes. He’s surgically implanted tiny radio transmitters into wild snakes, so that when he releases them, he can find them again.

“I’m getting the strongest signal in this direction,” he says. The beeps from the snake are louder when he aims an antenna in the right direction. “So now I know she’s very close to the edge of this kudzu patch.” 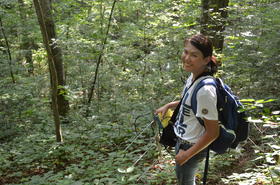 Alice McCurley, Felix’s research assistant, heads into the kudzu and is instantly in over her head.

“There’s a lot of places a snake could hide in here, isn’t there?” says Felix.

That includes under our feet. In some parts of their range, pine snakes dig long tunnels underground, and they will also occupy burrows dug by other animals, Felix says.

The big-bodied snakes have black patterns on their skin over yellow or tan coloring. Felix says people sometimes confuse them for rattle snakes, but pine snakes don’t have rattles, and they’re not venomous. When pine snakes feel threatened they make a loud hissing sound, which scientists call blowing, and they also shake their tales against dry leaves, which can sound deceptively like a rattle.

That may seem like a good amount of information about the animal, but Bryan Hudson — a graduate student at Georgia College and State University— says scientists know essentially nothing about north Georgia’s pine snakes.

“How do you have a major predator, a big charismatic animal that makes this crazy audible noise, that we just don’t know about?” Hudson says. “The answer is really simple, it’s just rare.”

Hudson works with Felix on what they call Project Pine Snake. They’re trying to learn more about the snakes, through research like the tracking they’re doing in the kudzu. They’re also reaching out to the public to submit photos of pine snakes on the research website.

Hudson says no one knows exactly what they eat, where they live or how many of them there are; though he does think that the snakes are rarer than they used to be.

There’s not much scientific information about pine snakes in Georgia. Felix says that’s because no one has studied them much. But, he says, anecdotally there used to be more of these snakes in the metro area.

“I spend a lot of time talking to older folks who grew up here, and they’ll tell you they used to be a very common animal,” he says. “My wife’s grandfather grew up in Nelson, Georgia, and he said when he was a kid, they would regularly find them and he would walk around with them around his neck to scare the girls.”

But these snakes aren’t all over the place anymore waiting to be used as instruments of teenage torture.

So what’s changed? Felix has a couple of ideas. One possibility is that they aren’t as rare as they seem to be; it’s just that no one’s really been looking for them.

But another option is roads. Felix says there used to be more farms here and fewer subdivisions. Now the snakes have to deal with roads.

“And a 6-foot-long snake in the road is just mincemeat,” says Felix. “People will go way out of their way to peg them in the head, maybe then back up run over it a few times, get out, cut the skin off.”

So the scientists are hoping drivers will consider not running over snakes in the road. Instead they’re asking people to let them know when they see a pine snake, so they can get a better grasp on where the snakes live.

They’re also working with people who have already found a pine snake on their property, like Dr. Austin Flint, who owns hundreds of acres in Cherokee County.

He leads a caravan of off-road vehicles up and down steep dirt roads winding through former farmland to show his property to the snake scientists and representatives from Georgia’s Department of Natural Resources.

Flint found a pine snake here for the first time, just a couple of years ago.

“It was a big beautiful animal, about 6 feet long,” he says. “I was so excited about it.”

Flint’s invited the DNR here because he’s interested in using prescribed burns to restore some of his land.

And the DNR might help him because the pine snake is on Georgia’s list of high priority animals to conserve. The snake isn’t endangered yet, and the state wants to keep it that way.

“If conservation’s going to be successful, it’s got to involve private landowners,” says Steve Raper, who is the coordinator the for the DNR’s private lands conservation program.

Because so much of the state’s land is private, Raper says, just protecting animals that live in parks wouldn’t be enough.

Hudson says based on the ecology of Flint’s property, it’s likely that fires once occurred here naturally. Based on where he and Felix have found pine snakes in north Georgia, Hudson says he thinks that fire would create a habitat that the snakes do well in. But there is still a lot of guessing, he says, because there’s still so much to learn about pine snakes.

“There’s no definitive answers,” he says. “The best we can do now is take what we have and try to piece things together.”