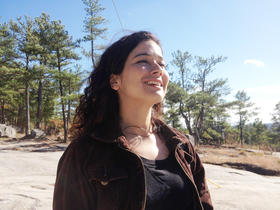 Stone Mountain is well-known for its carving of Confederate heroes, but one woman wants to bring attention to the living folks who people the mountain’s walk-up trail. Just before the weather turned chilly, WABE’s Myke Johns made the hike with her and has the story.

Broadcast version of this story

“But only recently did a pattern start to appear about how many from all over the world seem to come here,” she says.

So Shannon just started striking up conversations with people she encountered there. Then she started taking photographs and writing those stories down. And almost without realizing it, she was assembling an oral history project, drawing from that 1.3 mile stretch of trail.

“People from Sudan, people from Croatia, people from Bosnia…” Byrne says, pulling the list off the top of her head, “Muslims from all nations, it’s beautiful. And they have so much to say, and if you’re willing to talk to them, you can learn so much. Even if you’re the most educated person in the world and you think you know everything. You really know nothing until you start talking to somebody from somewhere else.”

By that measure, Shannon knows quite a lot by now—she guesses that she’s spoken to roughly 100 people so far, and she’s built a website to house these interviews, photographs and videos. She calls the project “I Am the Mountain.” In one video, a woman talks about her experiences during World War II, growing up in Poland and hiding Jewish people from the Nazis. In another, Shannon speaks to an inactive gang member, his affiliation tattooed on his bare arms. And in another, a deaf man in a cap and a kilt signs as he speaks.

“His name was Joe,” Byrne explains, “and he gave his interview in sign language, and he taught me the sign for ‘mountain.’” At this, Shannon claps her fists together and spreads her hands outward.

Byrne began collecting these stories in earnest this year, and she cites a specific date when this went from being a casual pastime to being a project: May 18.

“It had rained all day,” Shannon remembers, “and I ended up randomly meeting a man named Serge Mbunsu from the Congo. We ended up walking the five mile loop around the base of the mountain and I learned so much about him. He had been a priest, a Catholic priest in Paris!” Byrne’s glee here is apparent. She’s a naturally talkative, effusive person, but I notice that she gets truly exclamatory when talking about her interview subjects. “And I thought ‘wow, here he is, all the way in Stone Mountain,’” she says.

Meeting Serge and hearing his story made Shannon realize that all the people that she met, folks speaking in different languages, dressed in their cultural garments, all have their own stories.

“So,” Shannon puts it plainly, “I decided I would make myself available for it.”

For Byrne, there’s more to this openness than the desire to hear other people’s stories. Place has a lot to do with it. Shannon notes that she grew up in Stone Mountain and that the Ku Klux Klan chose the mountain as its rebirth place in 1915.

“So whenever I would say ‘hey, I’m from Stone Mountain…’” Shannon begins.

“Like, that’s the one thing that people know,” I interrupt.

“That’s the only thing, yes,” Shannon says, the exasperation still apparent in her voice. “So to come back after years away and suddenly see the world here, I was blown away. I wanted to be proud of where I’m from. And seeing this restores some of that pride.” 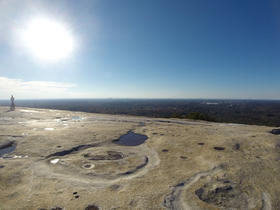 And in sharing these stories, Byrne hopes to restore it in others as well. She sees the mountain and the people on it as a sort of ambassador for the South, and she reminds me that she’s not the first who hoped Stone Mountain would be a symbol of hope.

“Dr. King gave a major shout out in the “I Have A Dream” speech,” she says, and sweeps her hand around the granite and scenery where we’re standing. “Among all the mountain ranges he mentions, ‘from the heightening Allegheny’s, to the prodigious hilltops of Maine, to Lookout Mountain, Tennessee,’” she quotes, “he specifically says ‘let freedom ring from Stone Mountain of Georgia.’”

And that may be what Shannon means by calling her project “I Am the Mountain;” that freedom is to be found in each person she meets, and each story she collects.

I Am the Mountain can be found here.