Following a tour of the center, Sen. Isakson said wait times at the center are getting better. 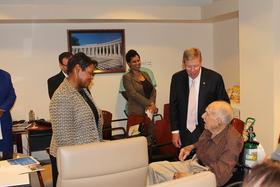 He also said the center has made drastic improvements to its mental health programs.

“A year and a half ago I was severely disappointed by the attitude of the staff here at the VA. Today, I was very impressed with the attitude. They’ve got a can-do approach. They’re willing to recognize the problems they’ve got and solve them, so we’re moving in right direction.”

But the Senator said the Atlanta VA’s call center needs work. According to Isakson, the center dropped 10,000 calls in May and 4,000 calls last month.

Isakson also highlighted a bill recently passed by Congress, which he said will lead to greater accountability.

As a result of the legislation, Isakson said a caseworker at the center, who was put on administrative leave, could face termination if wrongdoing is discovered in connection with a patient’s death. The death is currently under investigation.

Isakson has visited the center five times in the past 18 months.