The Georgia Senate approved a resolution 42 to 11 to let voters decide whether to cap the state’s income tax rate at its current level within the state’s Constitution.

Right now, the state’s income tax rate is 6 percent for all Georgians who make more than $7,000. Republican Senate President Pro Tem David Shafer says his resolution will help the state be more competitive. He says although Georgia’s income tax rate is lower than the federal tax rate, it’s higher than most other Southern states. 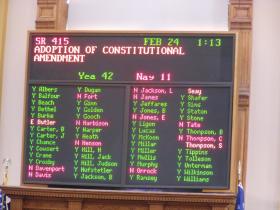 “It makes it clear that our income tax rate is not going up. It helps increase our competitiveness by pointing out to businesses making expansion decisions that while other states could increase their rates tomorrow our rates are constitutionally capped.”

And Shafer says if were up to him, he would lower and eventually phase out the state’s income tax, but he says this resolution is a step in the right direction.

However, Democratic Senate Minority leader Steve Henson accused Republicans of playing election year politics, because he says the rate hasn’t risen since 1980s. Instead, Henson opposed the legislation because he says it will lead to fewer potential options if lawmakers revise the state’s tax code.

“Know that as legislators and as government we need to have different tools and different options available and voting for that restricts it. The only reason we’re doing it is so that we will have a campaign tool during the election.”

That led to Shafer to accuse Henson of opposing the bill, so lawmakers could potentially raise taxes in the future. Shafer said, “Will the Senator accept my sincere congratulations for his very honest admission that you oppose this legislation because you want the freedom to raise income taxes.”

Sen. Henson denied Shafer’s accusations. He said, “I want the ability to lower taxes to many Georgians possibly or doing possibly doing nothing. Your statement is incorrect. I do not want to raise taxes. I am not proposing a raise in taxes. I want the ability to make decisions and have a broad range of tools to address those issues.”

The resolution now heads to the House where Republican Representative Larry O’Neal is majority leader.

“I will tell you right now, I don’t understand what they meant by a cap. I wasn’t aware even such a bill existed. No one in the Senate has consulted me about it. If it is about lowering income taxes, I would expect it would certainly get the Republican support in the House, but we’re not 2/3 majority.”

O’Neal says to reach a 2/3 majority the measure would need the support of not only Republicans but Democrats or an Independent. If approved by the House, the question would appear on the November ballot.