On Tuesday, the Georgia Senate unanimously approved a bipartisan education bill that would lead to changes in graduation requirements for high school students who also enroll in technical colleges and universities.

Supporters say right now high schools have one set of requirements and colleges have another. 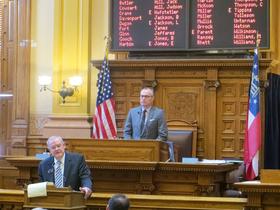 If the bill gains final approval, the Georgia Department of Education would work with technical colleges and universities to merge the two.

A large number of Senate Democrats also spoke in favor of the bill. Sen. Ronald Ramsay, D-Lithonia, says the bill answers the needs of two kinds of Georgia students.

“…Those who are higher achievers and can move on, and those who simply who don’t want to stay in high school because they have a certain level of hopelessness,” Ramsay says. “This bill allows them to receive the kind of industry certification that can allow them to have living wages and high paying jobs so they can be productive members of our state.”

The bill was a major legislative priority of Lt. Gov. Casey Cagle. Under the bill, students would have to be at least 16 years old and need to complete state requirements for the ninth and tenth grades. To get dual credit, they would have to meet the requirements to receive an associate degree, a technical college diploma, industry occupational certifications or licenses required to work in certain fields or complete two technical college certificate of credit programs.