The Georgia Senate Wednesday approved a bill aimed at separating the state from the Common Core education standards.

The bill establishes an advisory council of community members. The council will help the state board of education carry out its current review of the math and English/Language Arts standards. But some critics of the bill have said that creates an extra layer of bureaucracy. Sen. William Ligon (R-Brunswick), the bill’s primary sponsor, refutes that.

“You have to remember that the layer that’s added is involvement of our parents and our teachers – the ones that are there that are involved in the education of our children,” Ligon says. “And I don’t see that anytime you’re involving more parents you’re adding a level of bureaucracy.” 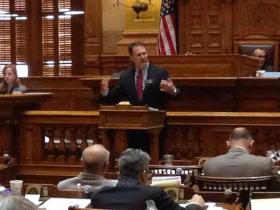 The legislation also prevents Georgia from adopting science and social studies standards set to roll out in the fall. That’s just one reason why some senators, like Democratic Whip Vincent Fort, voted against the bill.

“I think the Common Core is general guidelines for curriculum,” Fort said. “It provides a direction, more so than a mandate. And the extremist wing of the Republican Party is very paranoic [sic] about how this infringes on local control, and it doesn’t.”

The issue has sparked debate within the GOP. Some Republicans, like Gov. Deal and state superintendent and gubernatorial candidate John Barge, have publicly  supported the standards. Others, like Ligon and Lt. Gov. Casey Cagle, have staunchly opposed them. The original version of the bill called for Georgia to pull out of the Common Core. But GOP leaders reached a compromise.

Sen. Jason Carter (D-Decatur) is running against Deal for governor in November. He has criticized the governor’s education policies and voted against the bill.

“I think it’s a stunt,” he said after the vote.