Once a week, in the basement auditorium of the MedStar National Rehabilitation Hospital in Washington, D.C., a group of men gather to discuss the various struggles and triumphs of life in a wheelchair.

The program, called the Urban Re-Entry Group, is a gathering place for young black men who have been paralyzed by gun violence. Here, conversations flow freely about guns and violence, sex and politics, and life and death among the half-dozen or so regular attendees.

Davis was shot in the neck during a street fight 20 years ago. At 40 years old, he has now spent as much of his life in a motorized wheelchair as outside of it.

“If you know how to take it one day at a time and live life, then you wouldn’t let it affect you … If [you’re going to] wake up every morning and be miserable, then you’re going to make your body break down, and that’s something you don’t want,” Davis said in an interview.

In this room every Tuesday afternoon, conversations are frank and unfiltered. 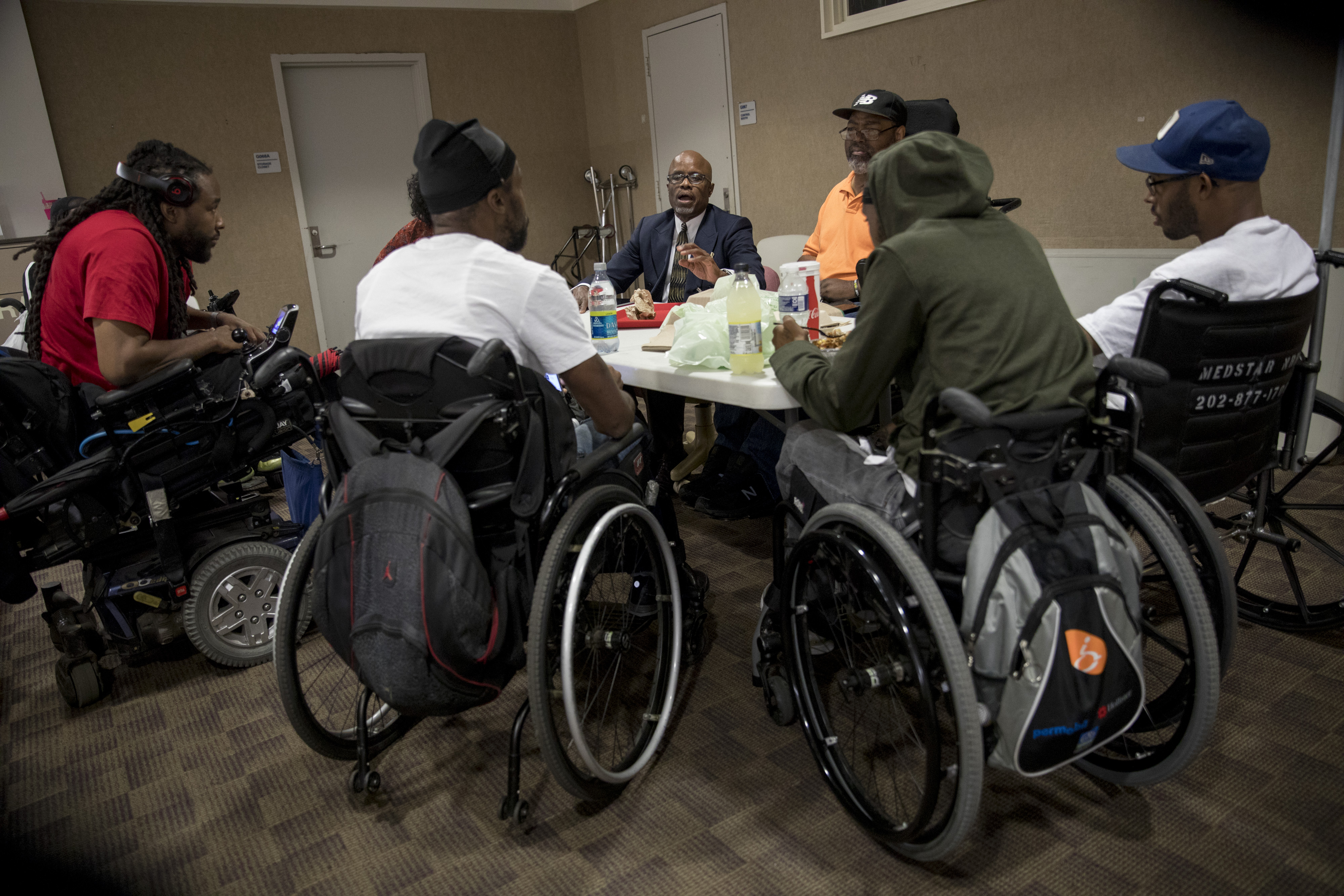 Every Tuesday, a group led by Dr. Samuel Gordon, center, gathers to discuss the daily realities of life in a wheelchair.

At various points, Davis and others debate the merits of religion, semi-automatic rifles and how they make their way to the streets (most gathered seem to agree they’re planted in neighborhoods by a corrupt government), and which 1990s rapper made the most influential album of the era (Tupac and Biggie both have passionate defenders around the table).

Despite the unstructured flow of discussion within the dull brown walls of their dimly lit meeting place, this is where the men make some of the most meaningful progress in adjusting to life in a chair.

“The Urban Re-Entry Group got started as a result of having a whole new group of patients that we hadn’t been, quite frankly, used to dealing with here in rehab and hospitals in general,” said Samuel Gordon, a clinical psychologist at MedStar who helped launch the group some 25 years ago.

“These were young, inner-city, primarily African-American males,” Gordon explained, “who, because of their involvement in street activities or just living in the inner city… sustained pretty damaging and devastating physical injuries.” 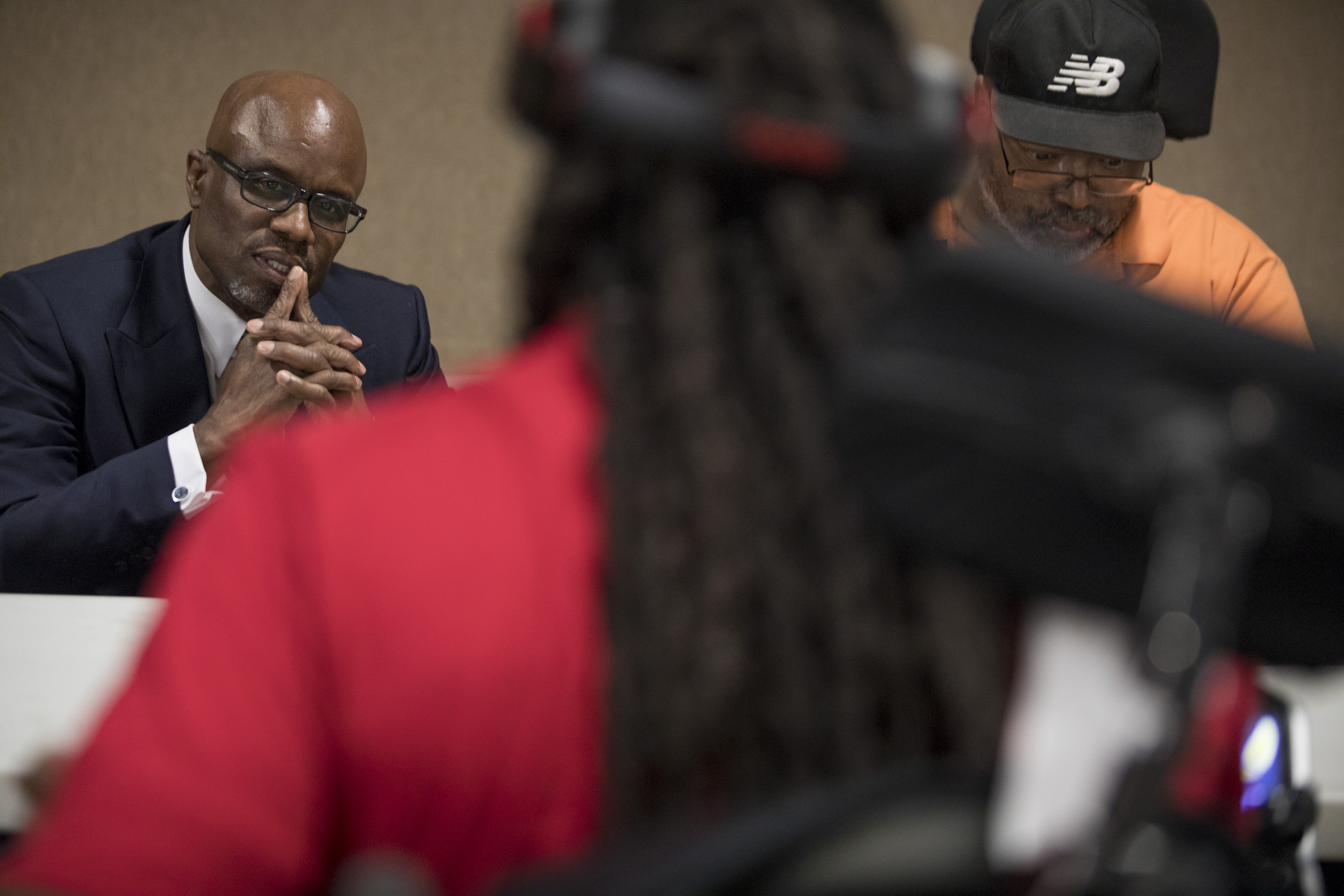 Dr. Samuel Gordon, left, was the black male psychologist on hospital staff when he helped launch the Urban Re-Entry Group in the 1990s.

At 30 years old, Deonte Gay is one of the youngest attendees of the group. Since being paralyzed as a random bystander near an attempted robbery on a liquor store 10 years ago, Gay said these meetings have taught him the kind of practical life lessons you can only learn from someone with similar physical limitations.

“Corie [Davis] was the first one who taught me how to put my shoes on,” Gay said. “I could not put my shoes on to save my life. Even the therapists, everyone tried [to teach me].”

“Then I went down to the group, and I just said it. And he was like ‘That’s all you need help with?”… And he broke it down in a way that was so simple,” Gay said. 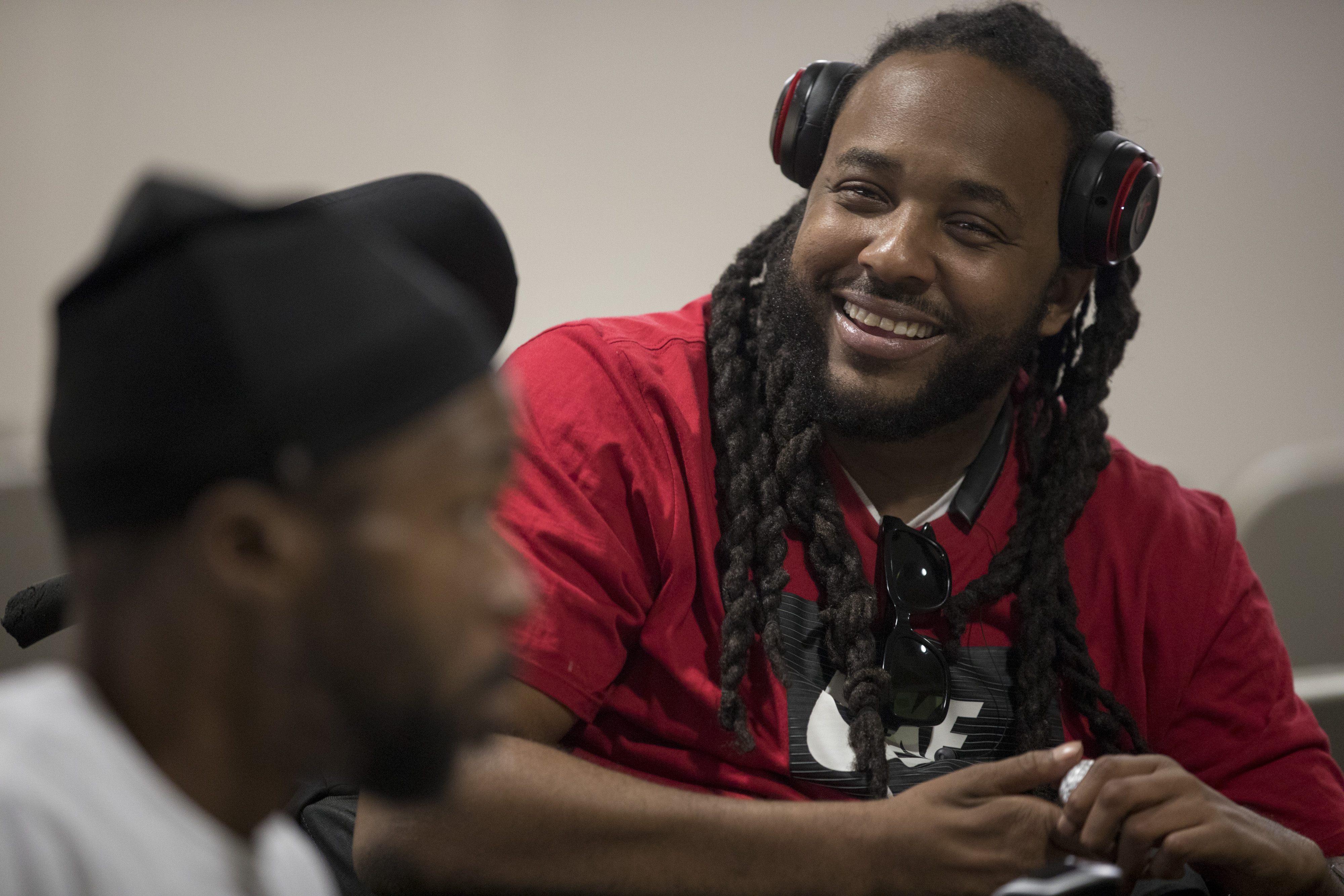 Corie Davis, right, has relied on his motorized wheelchair since becoming paralyzed in a street fight 20 years ago. In the years since, Davis has become a mentor to some of the younger men in the group as they adjust to life in a chair.

In the more than two decades since Gordon helped establish the group, patients have cycled in and out of the program.

Some patients defy their initial prognoses and regain significant use of their lower bodies. Others simply move away. Several, when faced with the prospect of living the rest of their lives in a chair, have taken their own lives or intentionally neglected their own health to die.

“Getting a spinal cord injury or a serious brain injury puts you in a sort of catch-22, where you’re both still alive, but not fully alive. Somewhat in prison. You’re not in a typical prison, but you’re kind of imprisoned by your disability,” Gordon said.

But despite the obvious difficulties of losing most of your mobility in the prime of your life, Gordon says that for many in the group, ending up in a wheelchair marked a positive turning point.

“Being in the wheelchair, even though it’s imprisoning in one way, it still gives them a reason to stay away from the life that they were living before,” Gordon said. 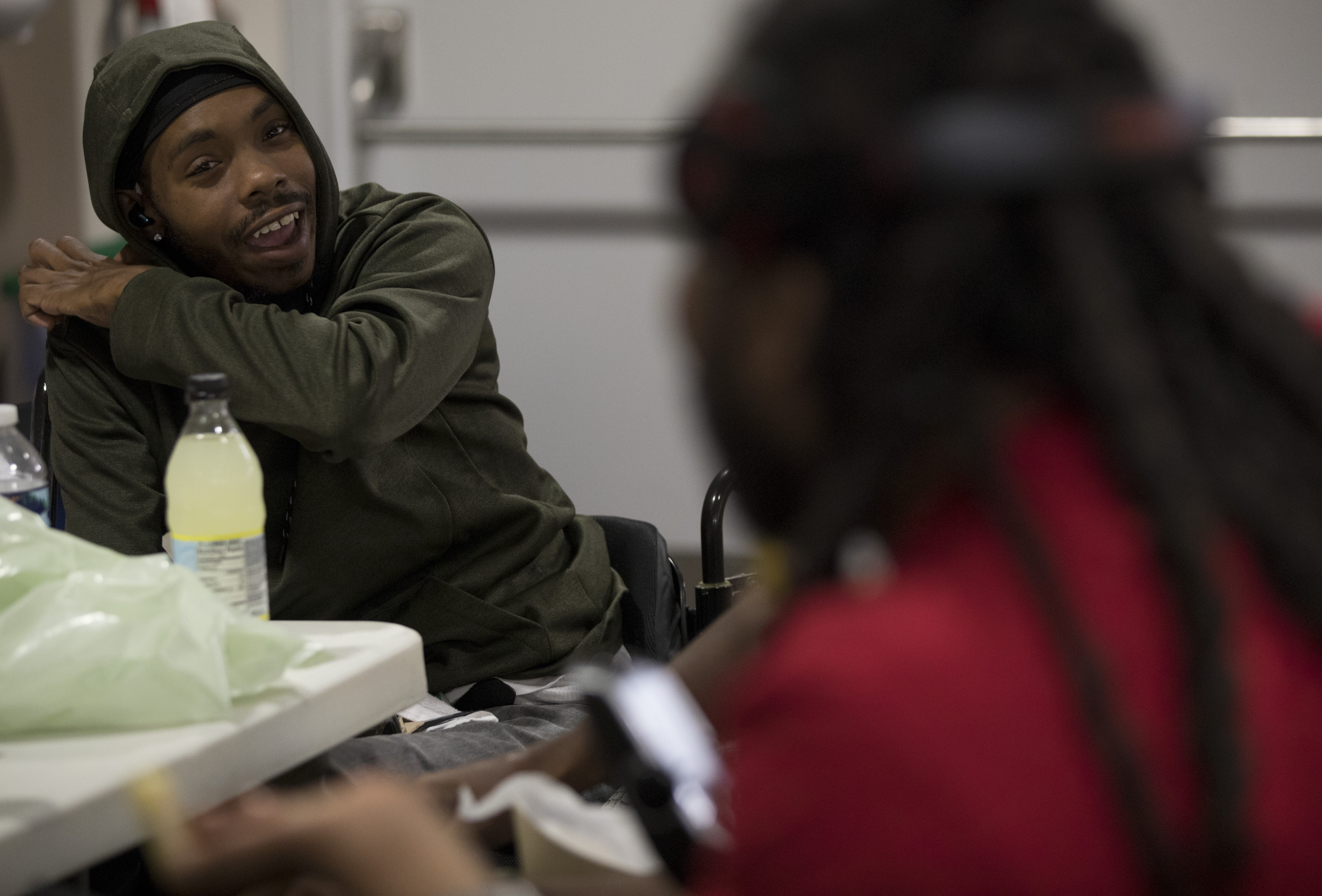 Deonte Gay, 30, is one of the younger attendees of the weekly Urban Re-Entry Group meetings. Since losing the use of his legs, Davis has learned to swim, skied and traveled. He credits the shooting for turning his life around for the better.

That perspective rings true for 30-year-old Gay, who called his shooting “the best thing that happened to me.”

“My life changed for the better,” Gay said of being paralyzed. I’d take these 10 years over a lot in my life … These [have] been the best 10 years.”

Of the estimated 300 people in the United States who are shot on an average day, about 200 survive. But many of them do so with devastating physical and emotional scars that last a lifetime.

Their ailments range from paralysis and possible lead poisoning, to crippling anxiety attacks and depression.

Eleven survivors of gun violence tell their stories in their own words in Shattered: Life After Being Shot.

Every individual’s story is paired with a portrait, — a composite — using a “stitching” technique that combines multiple pictures.

Explore the project, hear their stories

Thousands of people survive firearm-related injuries every year. Have you been shot? Is someone close to you a gunshot survivor? How did this change your life? What parts of you have yet to heal?

We want to hear your story.

Send us an email to shattered at wamu dot org or click here.

This project was produced in partnership with WAMU. Tyrone Turner is Visuals Editor at WAMU. Alana Wise is the Guns & America reporting fellow based at WAMU.

Guns & America is a public media reporting project on the role of guns in American life.