Despite the end of the holiday shopping season, retail giant Target is still dealing with the fallout of having 40 million customers’ payment information compromised. Aleck Ragsdale spoke with Atlanta shoppers over the weekend about what, if any, changes they’ve made to their buying habits. 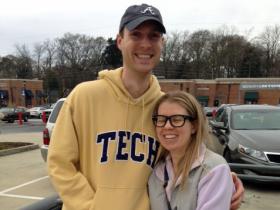 The holiday crowds have died down, but plenty of people are still coming and going from the Edgewood shopping district like Ashley DuPont and her husband Ken. The DuPonts say they were contacted by Visa fraud alert after shopping at Target. But this isn’t the first time something like this has happened.

“My dentist’s office was compromised. Someone filed taxes under my maiden name. I’ve been through a lot and some of it just seems like bad luck. Nothing’s 100% safe, but if you want to exist in 2013/14, you have to be able to use credit cards for the most part.”

“What’s the alternative? Carrying hundreds of dollars in cash? I don’t think many people are necessarily going to do that. Though I did see someone at Costco whipping out five hundreds, so some people I guess are choosing that method.”

Don Beavers from Hapeville chose that method a long time ago. He’s made it through his 70 years just fine without a credit card.

“Well I don’t believe in having to take a chance on people stealing my identity with it. I get by on spending my cash and don’t need all the headache”

Debra McWhorter says she isn’t worried about it and is taking a “these things happen” approach.

“If it’s gonna happen, it’s gonna happen. It doesn’t matter if it’s Target, Ross, or anywhere. So I’m going to keep using my mine. I usually use my debit card everywhere I go, and that’s never happened to me yet, and I’m hoping that it doesn’t”

The credit card information stolen from Target is reportedly being sold on the black market. Target is offering free credit monitoring service to the fraud victims.