As their new stadium is being built, the Atlanta Falcons are talking a big game about having an environmentally-conscious design and amenities.

But how sustainable can a massive $1.5 billion structure really be? And with sports facilities in Atlanta being replaced after only a couple of decades, how friendly is all that construction activity to the environment?

On “A Closer Look,” a professor who studies the sustainability of sports stadiums raised those questions and others about the wave of stadium construction in Atlanta. 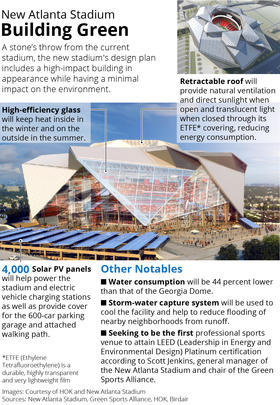 “In many ways, these giant mega-stadiums are kind of antithetical to green-building,” said Tim Kellison of the University of Florida’s Department of Tourism, Recreation and Sport Management.

Kellison was interviewed by Rose Scott and Denis O’Hayer as part of a series called “Under Construction” that is examining the new sports stadium issue in Atlanta.

When completed for the 2017 season, the new Falcons stadium could earn the highest designation for sustainability, according to Leadership in Energy and Environmental Design (LEED) guidelines.

While that’s all good and well, Kellison said, Philips Arena, which is home to the Atlanta Hawks since 1998, also is a platinum LEED facility. The team recently hinted that it would like to have Philips renovated or build a new arena, possibly elsewhere in downtown Atlanta.

On his Twitter feed, Kellison recently commented that “it’s tough to claim a commitment to the environment if you tear down your #LEED arena after 15 years. Lifecycle way too short.”

He said “going green” claims are part of what pro sports teams pitch to get new facilities, and they are aware of the environmental impact at hand.

However, “the greenest thing you can do for a stadium is keep it up and keep it running as long as you possibly can,” Kellison said.

“In Atlanta, you’re seeing with all three of the big three sports teams that’s not the case,” he added. “It’s going to be hard for teams to argue that what they’re doing is improving it.”

As the Falcons and new Braves stadium projects continue, and as the Hawks mull future arena options, Kellison will be able to get a first-hand view of what transpires.

This is the second installment in WABE’s “Under Construction” series. Other installments in the “Under Construction” series include a report on Atlanta’s new stadium deals, a history of Atlanta stadium construction, a look at the fan experience, and an interview with Cobb Commission Chairman Tim Lee. He brokered a controversial 2013 deal to draw the Braves away from Turner Field and downtown Atlanta, where the team has played since 1966.