Cellphones flashed and buzzed with prayer notifications. The imam replaced his rich, bass American voice for a more nasal, tuned Arab one and sang into the mike, “Allahu akbar, Allahu akbar” (God is greater, God is greater). Young children played tag across the marble floor, only to be scolded by a Masjid leader.

The city closed its shutters.

Backpacking Through An Atlantan Ramadan

I wanted to spend the last week of Ramadan reporting on what I saw, heard and tasted. I wanted to shine a light— a miles-wide, fluorescent, neon floodlight— on the positive that is evident every day to me in my community.

I reported on Ramadan while remembering that no photo or sound bite can serve to document the vastness of Islam in Atlanta, which consists of about 75,000 Muslims, according to Al-Farooq Masjid of Atlanta.

According to salatomatic, “the most comprehensive guide to mosques and Islamic schools,” there are also 81 mosques in metro Atlanta.

I originally planned on traveling to a different mosque every night for the last week of Ramadan. But on June 18, Nabra Hassanen, a 17-year-old Muslim girl in Virginia, was beaten to death with a baseball bat on her way from the Masjid to IHOP.

My parents’ alert level went from the normal “No eye contact on MARTA,” “Keep your phone charged at all times,” and “Try to keep your back to the wall” to “You want to go to the Masjid? At 9 p.m.? By yourself???”

Despite new practical concerns about my safety, I made it to iftars (the meal that breaks the fast) hosted by the Roswell Community Masjid, Masjid al-Farooq in downtown Atlanta, Masjid ash-Shura in Atlanta, Masjid an-Nur in Lithonia and Berkmar High School in Lilburn.

Let’s define Ramadan as a holy month on the lunar calendar in which many Muslims everywhere fast daily, abstaining from food and water from sunrise to sunset. The fasting symbolizes submission, which is the literal translation of the word Islam. Ideally, during Ramadan, the individual strives to become closer with the religion and set a high bar for the rest of the year.

Mosque is the anglicized version of the word masjid, which in Arabic literally means “place to bow down.”

Suhoor is the meal Muslims eat right before sunrise, when the fast begins. Iftar is the meal that breaks the fast.

And pakoras? They’re deep-fried vegetables that Pakistanis traditionally eat at Iftar. Pakoras are spicy, soft and, at least to me, icons of the month.

Here are some of the sights and people I met on my journey around metro Atlanta during Ramadan. 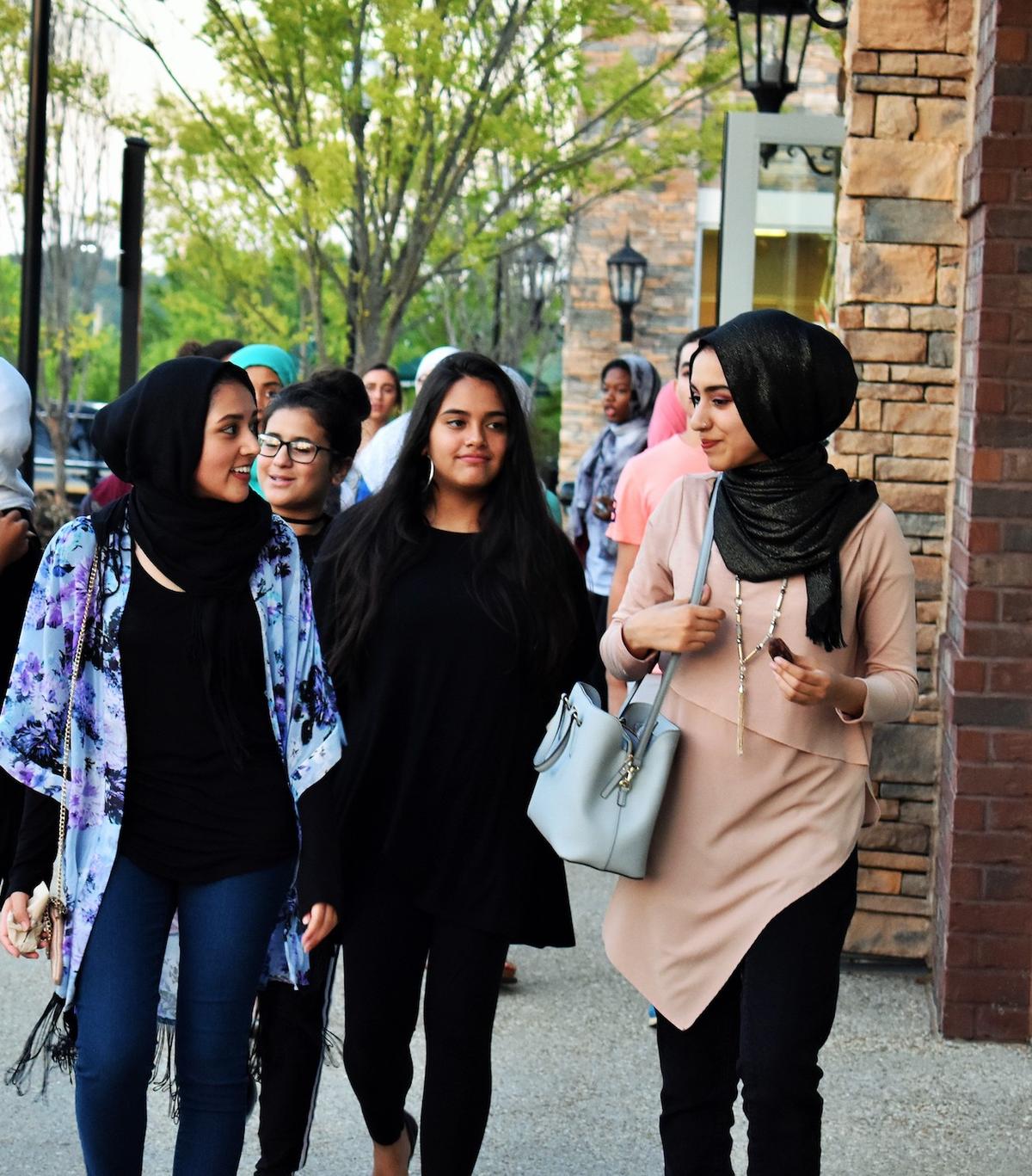 On Friday, June 16, teens on the council of Uplift, a youth group based at the Roswell Community Masjid, organized a youth Iftar at the Mediterranean restaurant Bezoria. The group walks outside, date palms in hand, to break fast and prepare for Maghrib, the sunset prayer. “[Uplift is trying] to empower the youth,” says Uplift President Dania Ibrahim, 18, who will attend Georgia Tech in the fall. “We’re trying to give them a say in what goes on in their mosque and give youth a say in what they do in their community.” 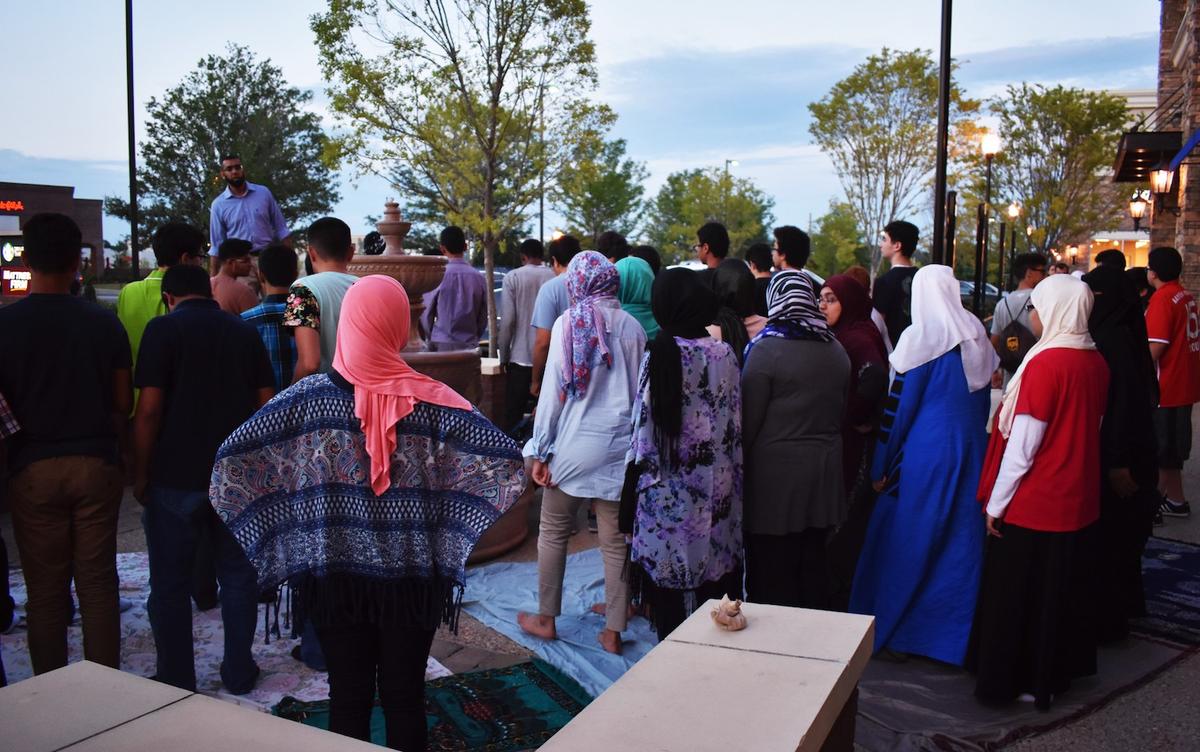 Imam Arshad Anwar (back) and Uplift President Dania Ibrahim (in pink scarf) make sure people are lined up for prayer.

“We try to make sure they’re as independent as they can be, and we just serve as mentors, which allows them to really cater to the youth as they need to be catered to,” says Imam Arshad. “The council is made entirely of youth.”

We sit with Shaheen Bharde, the public relations director who told me about the event, over plates of chicken shawarma. She talks about how Uplift organized its youth into four teams and had them compete for points by volunteering in different places around the community (but instead of Hufflepuff and Slytherin, Maryam and Sumaya). 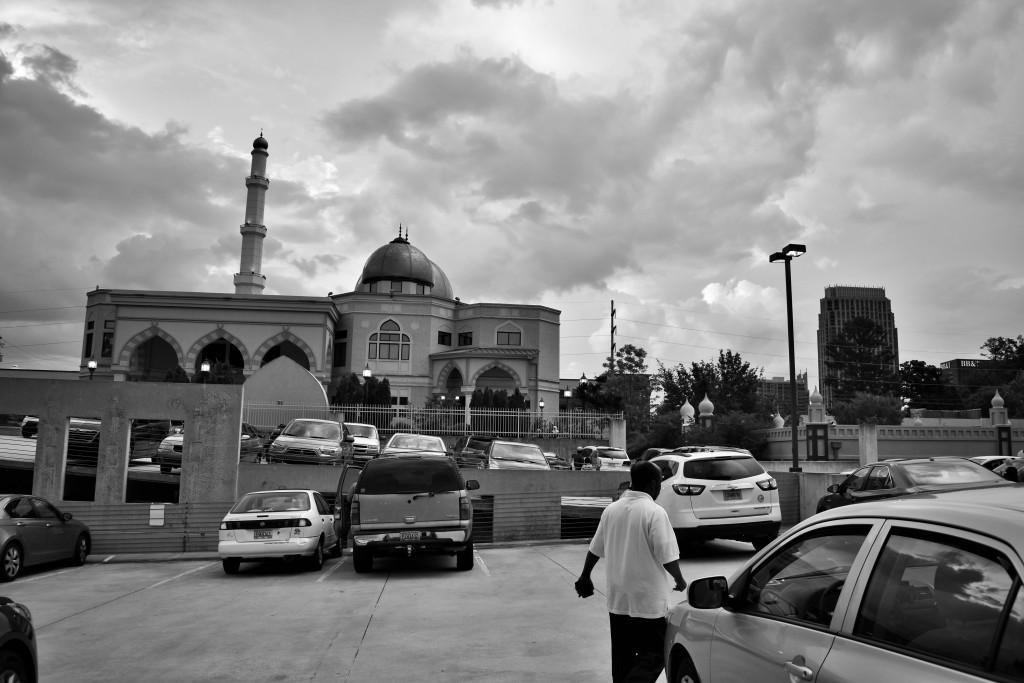 At Masjid al-Farooq in downtown Atlanta, a man parks his car. Zabihah, 17, goes to Grady High School. “Everyone comes here to help everyone else who is fasting.” 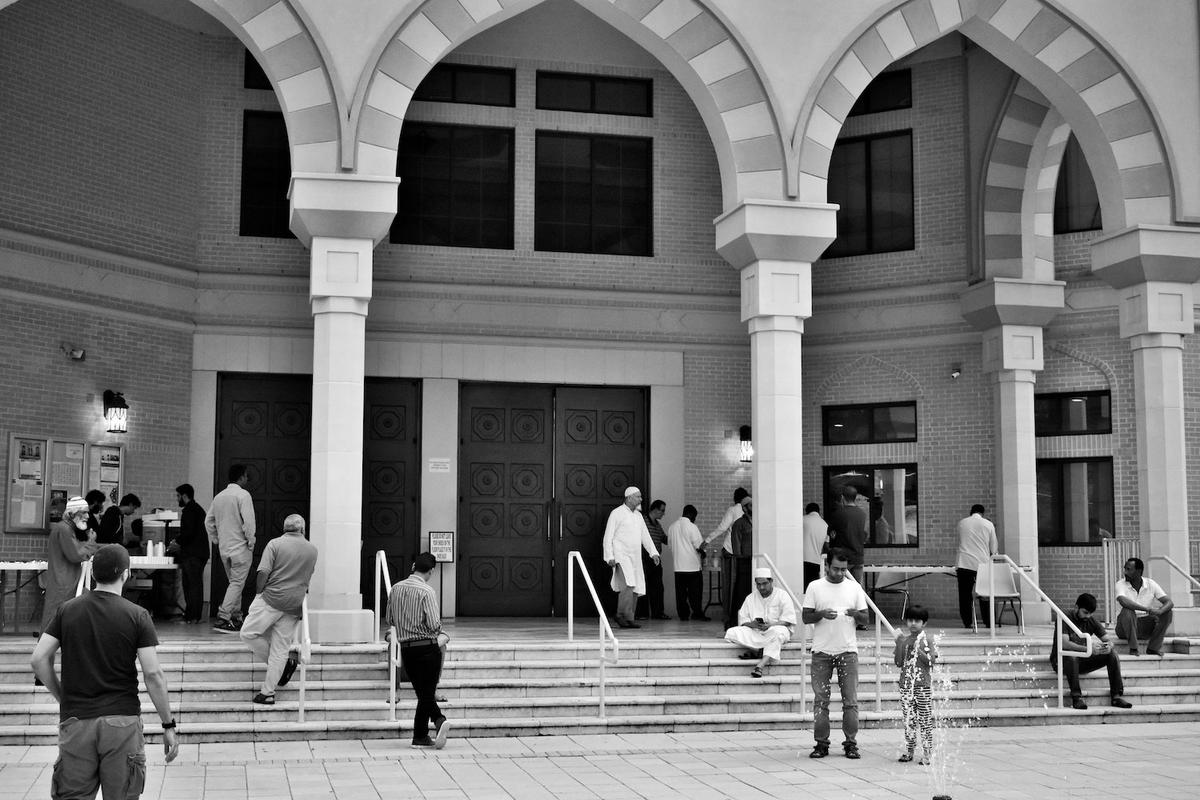 Brothers exchange greetings and wait for the sun to set. At this location, I was asked not to photograph the women’s side. Fountains line the marble courtyard. The city around it begins to twinkle. 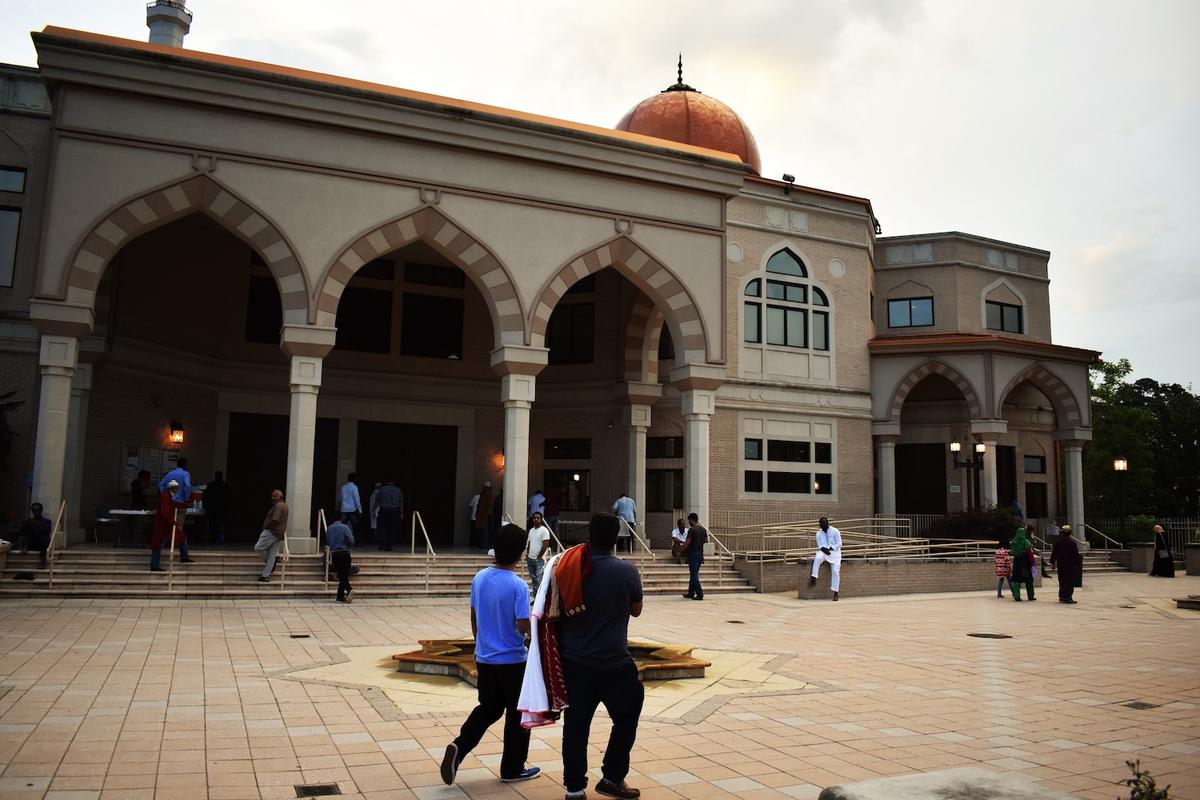 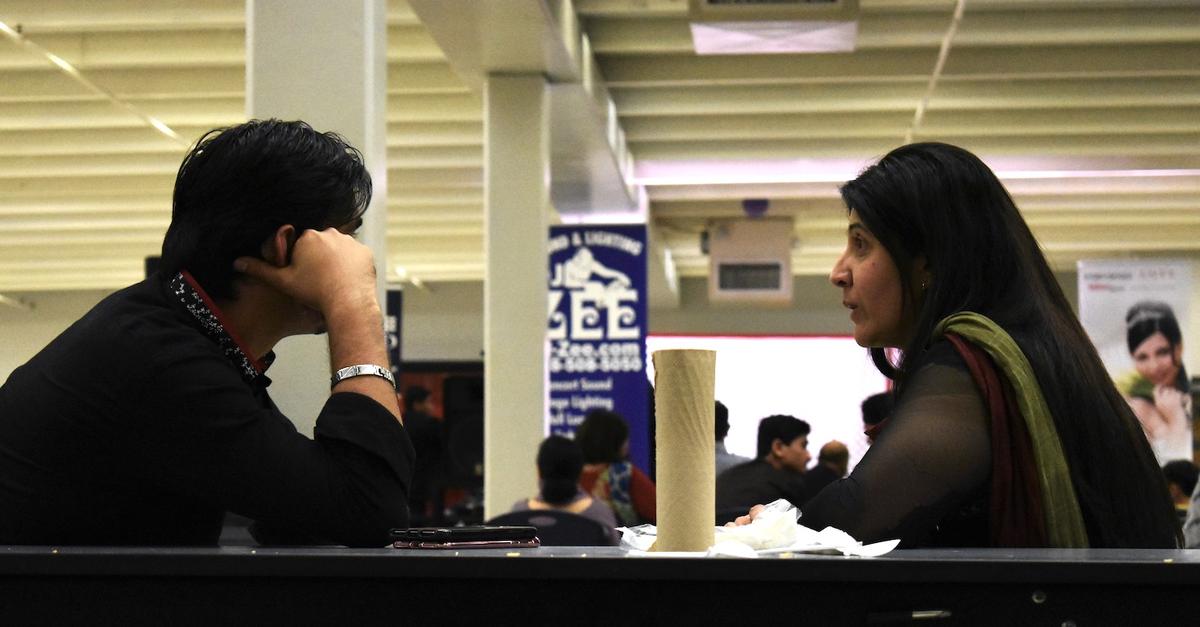 The event features vendors of the temporary henna tattoo, chicken and rice, blue sword balloons, and speakers who sing and tell jokes in Urdu, the language of Pakistan. 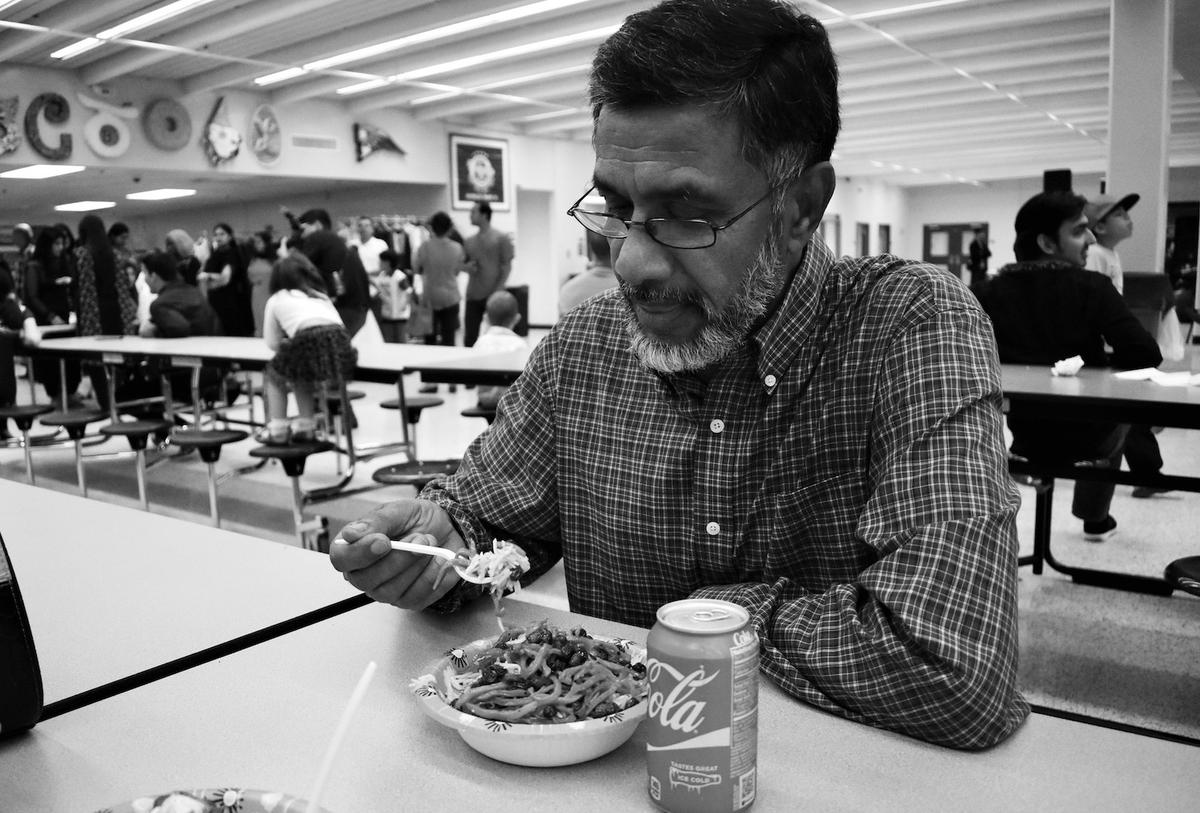 My dad takes a bite of beef shawarma with yogurt drizzled on top. 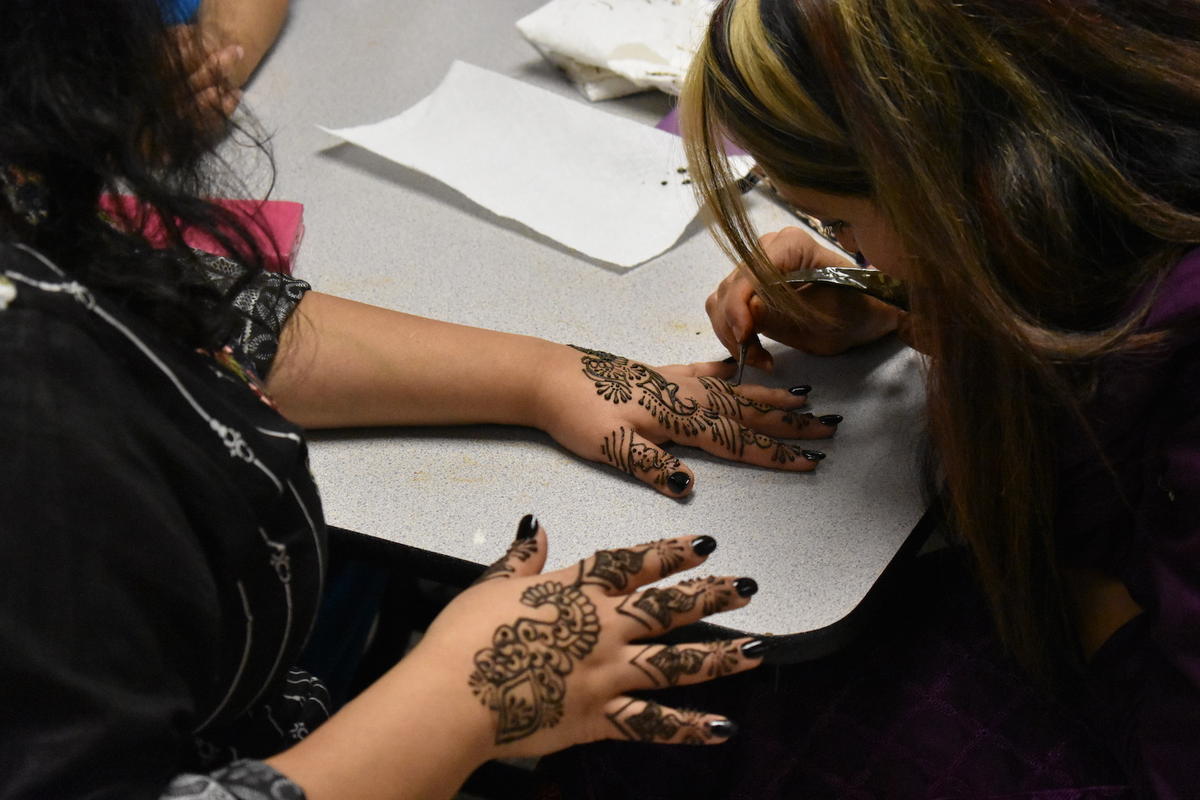 Traditionally, Muslim women wear the temporary tattoo henna for weddings and Eid celebrations. Into the night, the ink hardens. When she rubs it off, it has left bright red art on her hands.

Maya, 16, will attend Agnes Scott College in the fall. She hopes to become involved with the Muslim Students’ Association there, and the school paper, The Profile.

An audio story that accompanies this piece, Backpacking through an Atlantan Ramadan, will be published by Vox later this week.

This story was published at VOXAtl.com, Atlanta’s home for uncensored teen publishing and self-expression. For more about the nonprofit VOX, visit www.voxatl.org.