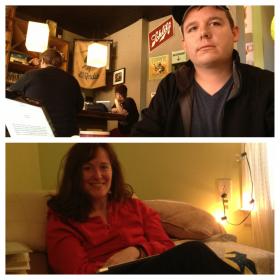 November is National Novel Writing Month. The challenge is what it sounds like: write a novel in one month. WABE’s Myke Johns spent November following two Atlanta writers as they hit the keys, and has this story.Tackling NaNoWriMo

Who on earth would try to write a novel in a month? Meet Daniel Lamb and Laurel Snyder. Both writers set aside their November for National Novel Writing Month, which most refer to it as “NaNoWriMo.”

Snyder is a full time writer, author of Seven Stories Up, Bigger Than A Breadbox, and a whole host of other picture books and young adult novels.

I meet Daniel Lamb at the beginning of November at a coffee house in Decatur. When I arrive, he’s at work on an iPad with a detachable keyboard.

“I’ve always aspired to writing a novel-length piece,” he tells me, “and I thought this would be a great opportunity to kick-start that.”

Three days in and Lamb’s word count is right around 3,000. I ask him to read me his first sentence and he obliges.

“I want to know where the South is—not the geography, but the true experience.”

Not far away in Ormewood Park, Laurel Snyder is working on a novel called The Orphan Island. Laurel has actually tried her hand at NaNoWriMo before. Her third novel, Penny Dreadful, was written for NaNoWriMo.

“I think somebody told me about it and I thought ‘that’s what I need! I need structure, I just need somebody to give me the push,’” she says. “I had an idea that had been gestating and I wrote it and it was kind of a disaster. I ended up re-writing that book like four times!”

Similarly, she says she’s been toying with the idea for this year’s novel for the last six months and is going into the month with an outline and drafts of pages already begun.

“I just need to start making the book,” she says, as if to goad herself into doing it by saying it aloud.

As to NaNoWriMo’s sort of arbitrary month-long time limit, Snyder says she doesn’t expect to stick to it.

“I didn’t last time entirely,” she says, “I was definitely a little behind schedule. I was looking at my little thing when I put my word count in today and it said I’m going to be done Dec. 16. Like ‘Oh! It might take me six weeks to write a novel!’ When the reality is that it’s going to take two years to write this novel.”

Okay, so why do this? Why put yourself under the pressure of producing 50,000 words in a month? To put that in perspective, in Times New Roman font, 12 point, single spaced, that’s right around 84 pages.

To get a better idea of why, I talked to Jackson Pearce, a young adult novelist. Her first book, As You Wish, and her second book, Sisters Red, were both written in what she calls “NaNoWriMo-style.”

“I didn’t do it during November,” she explains, “but I used the same sort of thing where I said ‘you have to write 2000 words a day.’”

She’s not participating this year, but she says she might not be a published author today if not for her  past participation in NaNoWriMo.

Pearce says being goal-oriented helps her stay focused. Granted, not everyone works that way, but she emphasizes the importance of not getting caught up in the size of the goal, but staying consistent and writing every day.

Lamb says he’s working on being consistent with a busy schedule—he works and he’s in school—but he’s also positive about the writing he’s been able to do.

“That’s been a gift this exercise has done for me,” he explains from the other end of the booth there in Manuel’s. “I’ve been more intentional about my writing. And I’ve got a lot more vision for what I’m doing than I did when I started.”

And finding that focus can be invaluable for a first time—or a fifth-time novelist. Jackson Pearce says that she hears from a lot of people that say they want to write a book and so few people actually do it. That’s one of the reasons she likes NaNoWriMo.

Laurel Snyder is fine with the motivational aspect of NaNoWriMo, but not without reservations.

What she’s getting at is that even if you manage to hit 50,000 words, that doesn’t necessarily mean you’ve written a publishable book. But—especially for first-timers like Daniel—it can reveal, frankly, whether you can or want to do this kind of thing at all. And NaNoWriMo—with its community and pep talks and framework—can help get you started.

“…and then you have to shut them off,” says Snyder.

Basically, shut off Facebook and sit down and do the work.

The vernacular of NaNoWriMo is very much like that of a game. If you hit the 50,000 word count by November 30th, you have “won” at National Novel Writing Month.

Meeting up with Laurel and Daniel at the end of the month, both have fallen short.

“I have failed,” Laurel chuckles.

Snyder says she’s got 4 chapters. Daniel Lamb calculates that he’s completed about 30 per cent of the work. Which is more than either had on November 1st, and that’s at least a strong start. And again, Daniel had never attempted a novel before, so he’s come away from NaNoWriMo with more than pages, but a self-awareness about himself as a writer.

“I didn’t expect my ideas to be as scattered and random as they were,” he admits over coffee at Manuel’s. “A lot of what came out was litanies of things that happened and little chronologies and timelines…stuff that looks like framework and outline form and not as much dense, fleshed out writing. I had it in my mind that I was going to sit down and be awesome and y’know, have a novel to shop by the end of November, so there was definitely a naivety on my part that I didn’t even see about myself.”

Even for those who “won” NaNoWriMo, at the end of November the work is far from over—I recall Laurel telling me about how she rewrote her third novel at least four times. And that’s actually good news, because it means that, like Laurel and Daniel, if you didn’t finish your book, you can keep going. If anything, both writers seem invigorated.

“Now there’s some part of me that’s like ‘well now I have to prove to myself that I can crank out 1,000 words a day,’” Laurel tells me. “I failed the project of National Novel Writing Month. I haven’t failed my novel.”

You can find out more about NaNoWriMo at their website, or about Atlanta’s chapter at NaNoLanta.org.