The recent snowstorm was trying for many, especially those who spent 12 plus hours in their cars on Tuesday and Wednesday.

Renee Parent first left her office in Sandy Springs around 1:30 p.m. on Tuesday.

“I was in the parking deck for an hour and a half and went maybe 10 feet.”

Parent parked and left her office again around 3:30 p.m. She spent another hour and half getting out of the parking garage and had a tough time getting on 400 southbound. 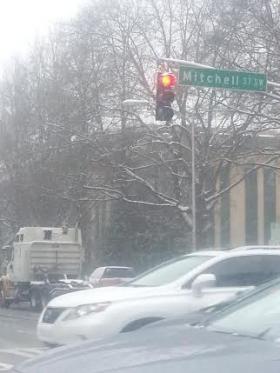 “I sat there for hours.”

Eventually, Parent got on 400 and said it was mostly smooth sailing. But then when 400 merged into I-85 South, Parent was dodging vehicles spinning on ice.

“It was awful, my stomach was in knots and clenched, because I’m from the South. I don’t drive in snow and ice. I wanted to get home, and then that long in the car I needed to go to the bathroom so bad, but I was afraid to leave my vehicle.”

Parent was also worried about running out of gas. Then, she hit another snag on an icy hill near the Seventeenth Street Bridge.

“As soon as we stopped no one had the traction to get going again.”

Hours later, Parent said a group of 20 men put cardboard under her tires and pushed her car up the hill.

Parent got going again and finally made it to her home in Grant Park about 12 hours from when she first started.

“I was so relieved that I hugged my husband and ran to the bathroom.”

And Parent says she learned this lesson:

“The first sign of a flurry, I’m going home in Atlanta now.”

It was also a tough few days for Marchail Solomon. He left his job in DeKalb County around 3:30 p.m. Tuesday and began making his way to Marietta. Solomon heard I-285 was gridlocked so he got on Memorial Drive and onto I-20 Westbound where he waited for two hours.  After getting off the highway, he spent the next few hours on icy streets.

“I had to pretty much conduct miracle after miracle of getting out of these side streets without just getting stuck.”

Solomon tried numerous alternate routes and eventually pulled off and slept in his car.

“It is frustrating because I wasn’t home, and I knew I was going to have to deal with the cold, and I knew that what I was seeing was not going to clear up anytime soon.”

When Solomon woke up, the roads were still treacherous and his car began to overheat.  But he was able to make it home about 15 hours after he left work on Tuesday. Solomon says he plans to put snow tires on his car.