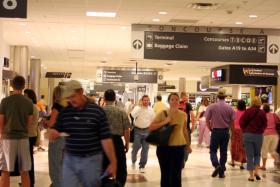 Following the diagnosis of the first Ebola patient in the U.S., some travelers at Hartsfield-Jackson International Airport are on edge.

Several flying at Atlanta’s airport say they have been worried about Ebola since the outbreak began in West Africa.  But after a Liberian man developed Ebola symptoms in Dallas, they say their concern has grown. Courtney Stubblefield flies weekly for work. She said, “I think it is extremely worrisome. I don’t necessarily think we’re getting the full story. I wish they would do something to curtail those flights from those countries.”

Anne Rosen is also nervous. Even though Ebola is not airborne, Rosen said, “I told my daughter, when I travel I want to get a mask.”

She lives in the Bahamas and is bringing her college-aged daughter to school in Atlanta.

“I just came on an aircraft and I was totally concerned about my health and my daughter’s. Honestly, I was. I actually was going to put off this trip until I learn more about Ebola. I am actually keeping a log of all the cases that are coming out every single day,” said Rosen.

But it doesn’t worry others like medical device salesman Rick Carrera.  Rosen said, “I think it’s a disease that’s contained by proper medical techniques, which are ones of sanitation, best practices and I think it would be very difficult to spread in the United States.”

Centers for Disease Control and Prevention spokesman Tom Skinner said the risk of someone getting Ebola from a fellow airline traveler is extremely low.  Skinner said a traveler would have to touch the blood or bodily fluids of person who is sick to get Ebola.

“What people need to understand is the way this is transmitted, so unless someone vomits on you, or their blood gets on you, and you put your hand in your eyes, your nose or your mouth, you’re not going to catch this.”

The CDC says you can also get Ebola from touching infected animals or contaminated objects such as needles.

Skinner said those traveling from West African countries are being screened for fever, which is one of the telltale signs of Ebola. They are also asked to fill out a questionnaire to determine whether they had contact with anyone with the deadly virus. When those passengers land in the U.S., customs and border patrol agents look for anyone exhibiting symptoms. They also educate fliers about the deadly virus in case they develop symptoms after they’re in the U.S.

“When people arrive at Hartsfield, if they are ill, we would have someone there to meet them when they got off the plane, asses them and determine what might be causing their illness. We have an isolation room,” said Skinner.

CDC officials also say U.S. airlines have also been trained on how to isolate anyone showing signs of Ebola.