Ebola is one of several viruses that cause hemorrhagic fever in humans and other primates.  It was first identified in 1976 near the Ebola River in what is now the Republic of the Congo.  Ebola Hemorrhagic Fever (Ebola HF) is severe and often fatal, killing 50% to 90% of its victims.  There is no known vaccine, cure or treatment.  The only known way to stop the spread of the virus is through medical isolation.

How does one become infected with the virus?

Ebola is transmitted by touching bodily fluids – blood, urine, perspiration – of a person with the disease, or by touching things that have been exposed to bodily fluids such as clothes, sheets, or medical supplies.

The virus continues to be virulent for days after the death of its victim, and in many cases the disease spreads to family members and others during preparations for burial.  Health workers are also at risk unless they carefully follow isolation procedures.

The virus is not spread through airborne transmission as is the case with flu.  Direct contact with infected bodily fluids is required.

All known instances of Ebola have occurred in Africa.  There have been no known human cases of Ebola in the U.S., Europe or Asia apart from a small number of laboratory accidents.

What are the symptoms?

After infection occurs, there is an incubation period of 2 days to 21 days (most commonly 8-10 days) during which the infected person shows no signs of infection.  During this time, the person is not spreading the disease.

Once onset occurs, the infected person typically becomes feverish and rapidly develops nausea, diarrhea, joint pain, muscle aches and fatigue.  At this point the person becomes infectious.  One of the difficulties in diagnosing Ebola HF is that the early symptoms resemble those of flu, malaria, lassa fever and several other diseases often found in that part of the world.

But Ebola HF often leads to death from widespread hemorrhaging, internal bleeding, dehydration and shock.  The only treatment available is replenishing the patient’s fluids and electrolytes and making the patient as comfortable as possible. 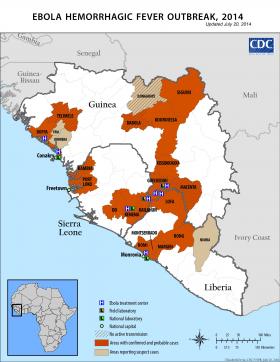 Where are the outbreaks occurring?

The current outbreak of Ebola is concentrated in the countries of Guinea, Sierra Leone and Liberia in western Africa.  This is an area that does not have a modern medical infrastructure, making it very difficult to put people in isolation and stop the disease from spreading.

As of July 27, the CDC reported that an estimated 1,323 people had contracted the virus since the beginning of this outbreak, and 729 people have died.  The exact number of victims is very difficult to calculate, and it is rising rapidly.

Large areas of central and western Africa are believed to be the natural habitat of the various strains of the Ebola virus. While the complete life cycle of the virus is not fully understood, bats are thought to play a key role in harboring the virus in the wild. Outbreaks occur when someone eats an animal that has been infected.  From there, infection is almost completely due to person-to-person contact.

Could an Ebola epidemic happen here?

Experts unanimously contend that is extremely unlikely.  In the U.S., any patient suspected of having Ebola would immediately be placed in isolation to prevent the virus from spreading, and epidemiologists would quickly track down the source.  U.S. hospitals have a lot of experience working with highly contagious diseases, and people understand the need for quarantine in these cases.

Dr. Tom Frieden, the director of the CDC, put it like this in a teleconference on Thursday:

“But in this country, we are confident that we will not have significant spread of Ebola, even if we were to have a patient with Ebola here.  We work actively to educate American health care workers on how to isolate patients and how to protect themselves against infection.  In fact, any advanced hospital in the U.S., any hospital with an intensive care unit has the capacity to isolate patients.  There is nothing particularly special about the isolation of an Ebola patient other than it’s really important to do it right.  So ensuring that there is meticulous care of patients with suspected or if we have confirmed Ebola is what’s critically important.”

For additional information, the CDC has an excellent overview of the disease and outbreak.