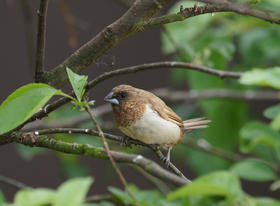 To learn about human speech, scientists often turn to song birds’ brains. A group of researchers at Emory University just published a paper that gives insights into how birds sing, and that may lead to a better understanding of how humans move.

“The question that we were pursuing here was, how exactly do single brain cells control behavior?” said Sam Sober, an assistant biology professor at Emory.

The motor system in the brain controls movement. When brain cells in the motor system fire, they’re telling muscles to act, whether it’s to walk, run, or, in the case of finches, to chirp.As heard on the radio

So while finches were singing, Sober and his students recorded signals coming from individual neurons in the finches’ brains, using tiny electrodes. The signals are called spikes.

“These spikes are really sort of the currency by which the brain processes sensory information and controls behavior,” Sober explained.

Sober says there were two possible answers in the study. Either the number of spikes a neuron sends is the most important. Or the pattern – or timing – of the spikes matters more.

The scientists analyzed the spikes just before the chirps they recorded, and were able to figure it out.

“What we found is that spike timing is much, much more informative about upcoming behavior than total number of spikes,” said Sober.

Sober says scientists already knew this about other parts of the brain, but it’s new for the motor part of the brain.

Melissa Caras is a neuroscientist at NYU, and wasn’t involved in this study. She says figuring out that spike timing is important in a motor system in the brain opens up new directions for research.

“If this gives us a clue as to how the brain is generating a complex behavior like motor output, that definitely has broader implications,” she said.

Caras added she’s curious to see if these findings are true in other animals, and also if they’re true for motor processes other than speech (or chirping). She says down the road, this research may lead to a better understanding of stuttering, and possibly of Parkinson’s.

Sober says it could help improve prosthetic limbs, as scientists learn more about how people control their bodies, and develop prosthetics that connect to our brains.

The paper was published this week in the journal PLOS Biology.