Some metro Atlanta residents are watching the conflict in South Sudan closely and say they are worried for their families.

This weekend, South Sudan marked its fifth independence day, but it was overshadowed by fighting that may mark the start of a second civil war.

At least 150 people have died and thousands are displaced in South Sudan after fighting broke out in the capital of Juba last week.

Zeinab Said Hessen left her hometown of Wau, Sudan in 1994 for Egypt before finally settling in Clarkston, Georgia as a refugee in 1999 with her seven children.

Since then, 53-year-old Hessen became a U.S. citizen and now runs a clothing business called Wau Fashion in Clarkston. 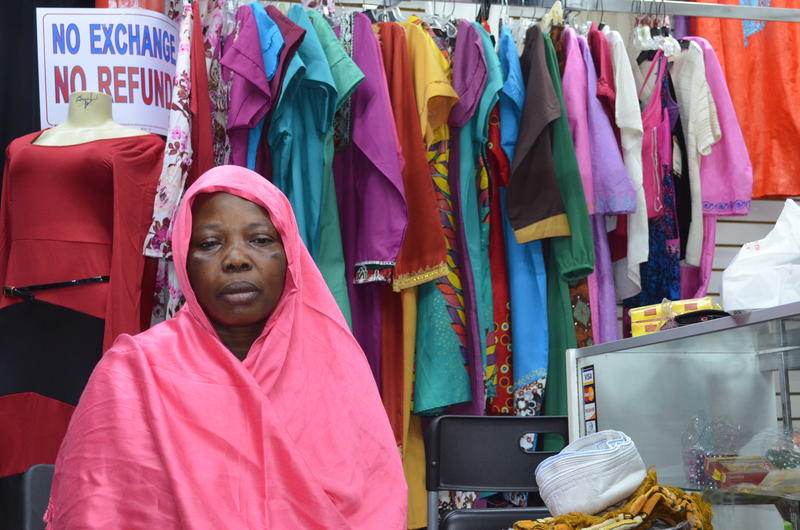 But the rest of her family is still in South Sudan. For the past three weeks, she hasn’t been able to get in touch with them and fears for their safety.

“The [militias] come to your house; they rape the women; kill the children; molest the young girls,” Hessen said. “They need to leave the innocent people alone. Please. We need peace.”

Hessen said many people are in displacement camps, but her cousin told her he would hide in the bushes to avoid the army and rebel forces fighting each other.

Fighting first broke out in other parts of the country, like Wau, before it moved to the capital. The United Nations says at least 70,000 people have been displaced in Hessen’s city of Wau since the end of June.

She cried as she pulled out her phone and showed a photo of a boy with his head chopped off in the desert.

“If I cry here, somebody will hear me,” Hessen said. “But there in the bushes, nobody hear them. My cry is the crying of the women, the innocent people in South Sudan.”

Hessen identifies as Christian, but has a Muslim name and covers her hair. She said many of her family members are of both faiths and said people try to label the fighting as a religious or ethnic conflict, but in her opinion, it’s just political.

The two leaders at war, President Salva Kiir Mayardit and Vice President Riek Machar, are from the Dinka and Nuer tribes respectively. The Dinkas hold the most power in South Sudan and are just one of more than 60 tribes in the country.

The two men are from different tribes and first fought each other in the country’s first civil war that broke out in 2013 and ended in August 2015.

Hessen, who is from the Ndogo tribe, said you don’t see this same division among tribal lines in the United States.

She said South Sudanese community members in Atlanta, regardless of tribe, are planning a trip to Washington, D.C. on July 29 to attend a protest of the conflict.

“It doesn’t make sense to me. I was born in the war and I was raised in the war,” Hessen said. “And I don’t want my kids to see what I went through. We just got independence five years ago.”

“Even with the peace deal that was supposed to result in a national unity government, the Vice President still has his own standing army that’s not part of the national army,” said Akinyemi, who also leads the school’s Center for African and African Diaspora Studies. “So how do you have a country and there’s never been a disarmament of rebel groups? They can always go back to civil war.”

President Salva Kiir had called for a ceasefire Monday, but the United Nations said heavy fighting continued on both sides.

“I am appalled by these indiscriminate attacks on civilians and peacekeepers. The two United Nations Missions in South Sudan (UNMISS) compounds in Juba have been caught in the crossfire and sustained mortar and heavy artillery fire,” said United Nations Secretary General Ban Ki-moon. “At least two internally displaced persons have been killed in the UNMISS protection of civilians sites, and some 35 injured.”

Two Chinese peacekeepers and one U.N. national staff member have died in the fighting.

“Yet again, the leaders of South Sudan have failed their people. Rarely has a country squandered so much promise, so quickly,” Ban said, also asking: “What kind of leadership is it that resorts to deadly weapons and identity politics, time and again? Failed leadership.”

However, China and Russia, members of the Security Council, have opposed an arms embargo in the past.

Akinyemi said many issues would be resolved with the elimination of the president and vice president, who the international community had been advocating to have work together, but there are other factors to consider as well.

“When we look at the issue of South Sudan, we also need to look at regional countries and their role in it,” Akinyemi said. “The fact that you have oil in there that has become part of the conflict. The role of countries like China, who’s interested in the oil, what role are they playing in trying to solve it or continue it? Where you have conflict, it’s easier to manipulate both parties to get what you want out of them. So there are all kinds of interests involved there beyond just the two characters.”