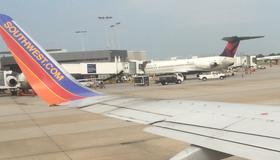 “Hey Atlanta,” a female voice says at the start of the 15-second commercial. “You know how we know this is a real relationship? We’re picking you up at the airport.”

The advertisements are meant to reinforce the brand’s image as the friendly, down-home carrier. But Southwest’s latest campaign is also the latest battle in the war for Atlanta market share. Delta remains the dominant carrier at Hartsfield-Jackson, accounting for about seven out of every 10 flights.

He doesn’t have to, as the advertisements leave little question.

“Atlanta: We don’t care if you’re diamond, platinum or pewter,” claims another commercial. “Heart means you don’t need miles to earn these smiles.”

Aside from the ad campaign, Southwest also announced a fare sale for some Atlanta routes.

Examples include round-trip fares to Washington-Reagan (DCA) airport for $98 and Los Angeles (LAX) for $198.  The restricted fares are good for travel through May 20.

Travelers will likely have to wait a few days to see if Delta matches the promotional prices, as Delta generally announces fare sales mid-week.