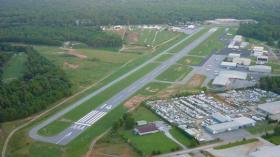 Spalding County had planned to ask voters in November whether they want a new airport. However, that is not the exact question that will appear on the ballot.Broadcast Version

County commissioners had voted to put the question on the ballot essentially to take voters’ pulse. According to Commission Chairman Chipper Gardner, there was a legal snag to asking the yes or no question. “A state Supreme Court decision says that you cannot have a straw poll on a general election ballot,” said Gardner.

Instead, the November ballot will ask voters whether they want the county to issue bonds to build a new facility.

WABE asked Gardner whether he thinks the new wording will change people’s vote. “I think it is quite possible that it may affect the way people will vote,” said Gardner. “But people are wanting to have a say-so in this. This is a major project for our county.”

Gardner says most of his constituents appear to be against building a new airport.

The existing facility needs upgrades, but Gardner says it is still unclear exactly how much those will cost. He and other commissioners are looking for more information on that from the Griffin-Spalding Airport Authority.