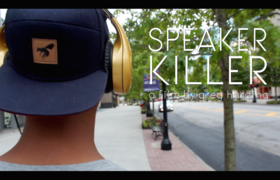 In the second installment of “24 FPS,” we go inside Atlanta’s music scene through the camera lens.

In film school, filmmaker Greg Harding focused on narrative film (fiction, for those unfamiliar with film terms), but after working on a documentary for a nonprofit, he quickly fell in love with that style.

His latest project is a documentary short that focuses on Atlanta producer and musician Kamal Gillespie, or his stage name, SpeakerKiller.

In Atlanta, musicians dropping beats and filmmakers shooting rolls (well, digital rolls) share common ground. Both are pursuing up-and-coming art forms in the city, so Harding said it felt natural to make a documentary on someone who is basically fighting the same fight. “And selfishly,” he said, “it let me explore my city through that [musical] medium.”

Greg’s film, “SpeakerKiller,” along with two other short documentaries about Atlanta musicians, will debut at the Plaza Theatre next Friday as part of the “Homespun” series.

“24 FPS (Frames Per Second)” is a weekly segment on “City Lights with Lois Reitzes,” where we hear from local filmmakers. They have the freedom of independent filmmaking, but that means they have to create their own budget through fundraising and smart filmmaking techniques.

In these segments, they tell us about being a filmmaker in Atlanta, their projects and the how-to’s of film production.