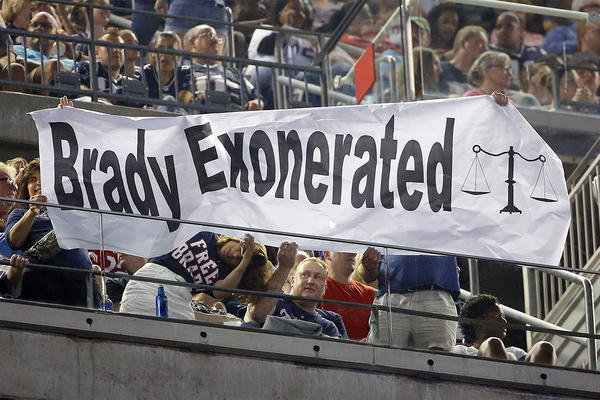 The NFL season officially kicked off Thursday night in Foxborough, Massachusetts. Reigning Super Bowl champions, the New England Patriots took on their conference rivals the Pittsburgh Steelers at Gillette Stadium, ushering in the new season. The Patriots beat the Steelers 28-21.

The Patriots had a difficult post-season following their nail-biter, on-the-edge-of-your-seat Super Bowl victory over the Seattle Seahawks earlier this year, in a 28-24 win.

But in the months since, football fans and followers have been absorbed by the off-field legal battle, dubbed  “deflategate,” between the NFL and the Patriots over star quarterback Tom Brady’s four game suspension, which was recently overturned by a federal judge.

Members of the Patriot’s team allegedly deflated footballs during last season’s AFC play-off game, making it easier to pass and catch the ball, subsequently winning the game and advancing to the Super Bowl. The league accused Brady of having knowledge of “deflategate” and suspended him for four games.

The NFL has faced ongoing criticism over how it handled “deflategate” and other serious sideline issues, like player-involved domestic violence, substance abuse and injuries, including the ongoing concern over concussions.

So how will the league handle its next crisis? The author of  the new eBook “The Future of Football,” Ranzel Kendrick, who writes under the pen name Czonko Bezrski, Jr.,   joined “Closer Look” to discuss that and more.