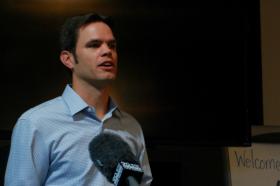 Atlanta may still be in its infancy as a hub for technology startups, but one group is trying to combine the elements of success under one roof to help local entrepreneurs.As heard on the radio

That’s where the Tech Village comes in. Individuals rent desks for $325 dollars, and there, they’re connected to other startups, as well as venture capitalists, marketing groups and mentors to help grow their businesses. Cummings says having those resources helps entrepreneurs grow their businesses from one person’s idea to a staff of 30, the employee cap for housing at the village.

“Before Atlanta Tech Village … you had to sign a five-year lease, a three-year lease, and those types of constraints and those types of worries are not most important to the business. What you should be worrying about are customers,” says Jon Birdsong, who founded Rivalry, which helps sales representatives close deals. “The accessibility to a place, a physical location where some of that is taken away, and you can just focus on the customers, is critical.”

Cummings ability to finance the project comes from his own startup success. In 2007, Cummings co-founded the software company Pardot, which was bought by ExactTarget for about $100 million in cash in 2012. That money was used to to buy and renovate the 5-story, 103,000 square-foot building located on the city’s north side that now houses the Atlanta Tech Village. The incubator opened at the beginning of this year and currently houses 110 area startups, though more are expected move in in the coming months.

“I think the building we’re standing in now is the biggest change that I’ve seen [this year],” says Jeff Hilimire, who moved his startup, Dragon Army, into the Tech Village last month.

Dragon Army, which builds games and apps for mobile devices, is Hilimire’s third Atlanta-based startup, and the city tech vet says getting local investors to take risks remains a challenge.

But an environment of more conservative investors is half the problem, according to Hilimire. He says for Atlanta to become a startup destination, entrepreneurs need to take a more business to consumer approach.

“The general public hears about the Facebooks, and the Twitters and the Instagrams,” Hilimire says. “That’s kind of the sexier side of startup success. The more of that that can happen in Atlanta, to me, is the only thing that’s holding us back in terms of being a top five city for startups.”

Cummings says the Tech Village will house 150 startups after renovations to its 5-story building are complete in June.