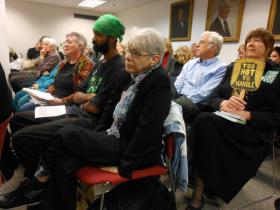 A state inspector said today Georgia Power’s nuclear expansion project at Plant Vogtle in Augusta will be delayed at least 15 months – twice the delay projected just a month ago.

In testimony before the state Public Service Commission, nuclear engineer William Jacobs blamed the delay on “unsatisfactory” performance by Westinghouse, the company responsible for designing the two proposed reactors, and the Shaw Group, which handles most of the heavy construction on site.

Jacobs said the Shaw Group has been particularly deficient.

“They’re a new organization, new to the nuclear industry. I don’t think they were really ready for the rigor and the level of detail that’s required in nuclear power,” said Jacobs.

Jacobs now estimates the first new reactor won’t be online until at least July 2017 – 15 months after the originally planned completion date. He added it remained difficult to pin down an exact time frame because Georgia Power and its contractors have yet to establish an updated long-term schedule.

“The project must have an agreed-upon and fully developed integrated project schedule. You can’t run a project of this magnitude, this complexity without that type of schedule,” said Jacobs.

Georgia Power is the primary owner and manager of the $14 billion project. Its customers are currently paying the project’s financing costs upfront, and may be asked at a later date to absorb costs associated with the delays.

Georgia Power and its contractors are currently locked in court battles over a number of cost overruns. Because the disputes are still pending, company officials won’t say how much ratepayers could be responsible for. But expert observers say the project is at least a billion dollars over budget.

During the meeting’s public comment period, more than a dozen ratepayers and activists laid into Georgia Power and urged state officials to halt the project.

“This project is behind schedule, it’s over-budget, it’s seriously lacking on basic safety elements and it doesn’t have a concrete plan or schedule moving forward. This is not a prudent use of taxpayer and ratepayer money,” said Courtney Hanson of the advocacy group, Women’s Action for New Directions.

Neither Georgia Power nor its contractors responded to WABE requests for comment about the day’s hearing.

At the meeting, Georgia Power officials said the company would continue to place its primary focus on safety. They reiterated previous statements that the project would ultimately prove  beneficial to customers.

The Public Service Commission will vote whether to approve Georgia Power’s latest round of spending on the project February 19th.