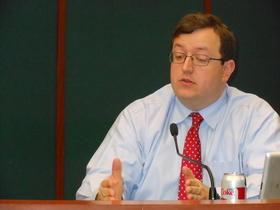 State leaders continue to say they won’t expand Georgia’s Medicaid program under the new Affordable Care Act.  On Wednesday, November 6, 2013, a select state Senate committee looked at some compromise proposals a few other states have tried to cover more of their uninsured citizens, while getting Federal waivers from some of the Act’s requirements.

But committee chairman Joshua McKoon (R-Columbus) told WABE the plans being tried in Arkansas and Iowa don’t fit well with the needs of Georgia’s population.

As WABE’s Jonathan Shapiro recently reported, the Georgia Hospital Association urged the state to expand Medicaid and accept the Federal financial help that comes with the expansion.  But McKoon said, even with the Federal help, the state still could not afford to expand the Medicaid rolls.

“When we have finite resources, and the Federal government is totally unwilling to give us the flexibility to address these problems, it’s just impossible to accept the quote-unquote solution being offered from Washington,” McKoon said.

In September, Republican Governor Nathan Deal had said he was open to looking at the compromises being tried in other states, but was skeptical about them.

McKoon estimates a Medicaid expansion would cost the state $450 million per year over the next ten years.  But he said he and other GOP leaders might consider doing it, if the Federal government agreed to give the state block grants to develop its own framework for the expanded program.

The Georgia Budget and Policy Institute disputes McKoon’s $450 million annual cost estimate.  The GBPI says McKoon and other GOP leaders included more than $200 million in average annual costs which would have occurred with or without the expansion.  According to GBPI, removing those costs brings the average increase to around $210 million per year for the next ten years, which it says would amount to “barely a 1 percent increase in Georgia Medicaid spending over the next decade.”