Georgia students are back in class and whether they know it or not, they’ll have a new leader in January. In November, voters will elect a new state schools superintendent. Tuesday, the two candidates vying for that post debated each other for the first time at a forum hosted by the Georgia Partnership for Excellence in Education. 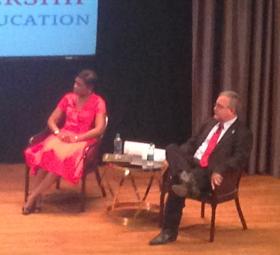 Before the Common Core came along in 2012, schools used the Georgia Performance Standards. The GPS were first implemented  in 2005. Before GPS, it was the Quality Core Curriculum. Teachers have said switching so much hasn’t been good for instruction or students.

Woods said he didn’t agree with the state board of education’s decision to adopt the standards in 2010. But now that they’re here, he said, teachers should be able to review them and make changes if needed.

“I want to make sure that we, as a state, have the flexibility to move and control education in Georgia, and that’s specifically at the local level because all schools are different,” Woods said.

“Unfortunately, I just feel like we’re just jumping too fast into something, and especially if it’s tied to teacher accountability,” he said after the debate. “We’ve never field-tested the test. We have nothing in terms of looking at the test questions, they’re even in development as we talk.”

The tests will be issued this year. Scores will be included in new teacher and principal evaluations. Wilson says the state should proceed with Georgia Milestones carefully.

Woods and Wilson both said they support charter schools, although Wilson is not a fan of privately run charters.