Georgia has one of the lowest high school graduation rates for African American males in the country.

That’s the latest from a 2012 national report.

Later this year, new data will show if the state has made any improvement. 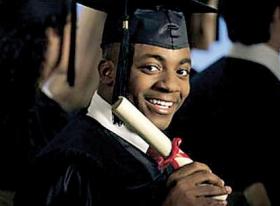 “The problem is not our boys. The problem is the conditions we put these boys in that allow many of them to get turned off to learning and get drawn into the streets and other negative activities.”

Dr.  Pedro Noguera is a professor of sociology at New York University.

On behalf of the Schott Foundation, Dr. Noguera and others took data from all 50 states to examine patterns related to the black male graduation rates.

Dr. Noguera says black boys stand out because they’re over-represented in areas associated with being at risk.

“From who’s being punished and suspended to who’s in special education to who’s in remedial classes and they’re also under-represented in all the categories you associate with success.”

Noguera wants to reverse that trend.

“We need to focus on creating positive learning environments that support the development of boys and young men,” says Dr. Noguera.

So, what’s the solution?

“It begins with supporting children, ensuring that they stay in school and that they achieve in life. We believe that every child should have a one-on-one mentorship,” says Frank Brown.

The newly named executive director of Communities in Schools of Atlanta, Brown told WABE, he sees his role as representative of the many kids CIS helps.

Brown says a main model of CIS is to go into schools and identify students that are at risk.

On site counselors work with principals and teachers and m

But it doesn’t stop there.

Issues that schools can’t handle, CIS is there to pick up the pieces.

“We literally are handling everything the school just doesn’t have time to. Whether it’s us giving them money to keep the lights on or connecting them to the mental health services.”

But, CIS is not in every school and Frank Brown remains hopeful that services and resources will expand further than the current 16,000 students the organization is helping.

Communities in Schools is working with some schools in Atlanta, DeKalb and Fulton County school systems.

This report is part of American Graduate – Let’s make it happen – a public media initiative supported by the Corporation for Public Broadcasting to help more kids stay on the path to graduation.