Fourteen organized labor and left-leaning political groups Thursday called on Georgia Insurance Commissioner Ralph Hudgens to stop what they say is his obstruction of the federal Affordable Care Act, known to many as Obamacare. To hear an audio version of this story, click the listen icon above.

The move came in response to comments Hudgens made last month  at a Floyd County Republican rally.  He called Obamacare a “problem” he’s working to fix. 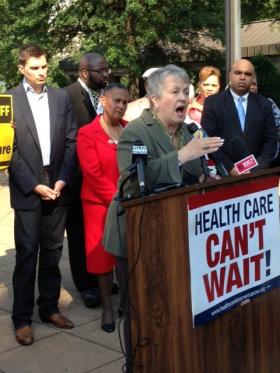 “…we are doing everything in our power to be an obstructionist,” Hudgens said in a video posted online.

“The dispute over healthcare reform has been settled.  It is now the law,” Adams said. “And we are saddened by the latest actions and public statements by Commissioner Hudgens.”

Georgians “need to know how to navigate our marketplace,” Orrock said, adding that residents look to the state’s leadership to provide that guidance.  She and others also called on Gov. Deal to rethink his decision not to expand Medicaid.

Following the press conference, representatives delivered a letter to Hudgens’ office asking him to be “fair and impartial” in implementing the healthcare law.  They also requested a face-to-face meeting.

Hudgens’ spokesman Glenn Allen told WABE the commissioner was traveling and had not seen the letter, and that Hudgens would not comment on today’s press conference.

[Expanded healthcare coverage on 90.1 and wabe.org is the result of a partnership between WABE, NPR and Kaiser Health News.]