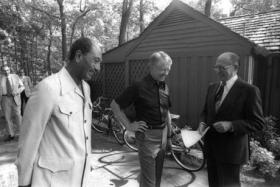 The state of Israel was created in 1948, and was immediately at war with its neighbors. Egypt was seen as its greatest threat. In 1978, newly elected President Jimmy Carter invited Israeli Prime Minister Menachem Begin and Egyptian President Anwar Sadat to meet at the President’s country residence, Camp David.

Carter hoped their discussions would bring peace to the Middle East. Author Lawrence Wright’s new book, ‘Thirteen Days in September’ recounts the talks that eventually resulted in the Camp David Accords. Host John Lemley spoke with Lawrence recently, and they began by talking about the personalities of the three world leaders involved in the talks.

Broadcast version of the story that originally aired on September 19th, 2014.

Lawrence Wright will be reading from the book at the Carter Center this coming Monday. More info on that event is available here.