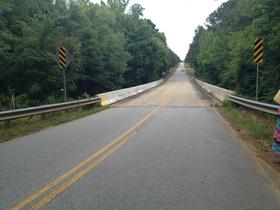 Every day, more than two million people travel across Georgia bridges that are deemed “structurally deficient,” according to a new study by a construction trade group.

The study by the American Road and Transportation Builders Association says 835 Georgia bridges, or about six percent, have at least one key component in poor condition.

Of those 835 bridges, the three most heavily traveled bridges are in the metro-Atlanta area, each with more than 90,000 crossings per day.

“It’s not a surprise to us,” said Natalie Dale, spokesperson for the Georgia Department of Transportation.As heard on the radio.

Dale said the study’s numbers come directly from state data. She said repairs are either underway for some of the bridges or will be soon.

“We will either put the money into that to increase safety or we would close a bridge if that became the final option,” Dale said.

Dale said the state’s 14,769 bridges are inspected every two years, and none identified as deficient are unsafe for travel.  However, she said getting repair funding is always a challenge, especially as federal money diminishes.

The state estimates it would cost nearly $15 billion dollars for all bridge repairs, according to the report.