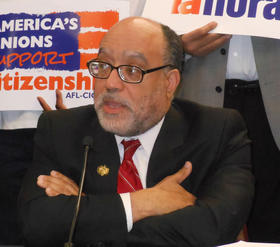 Reed says the independent expenditure committee, commonly referred to as a “super PAC,” is necessary to counteract special interest money coming from out-of-state.

“There were groups not from the region but from California and from Washington that were getting ready to invest significant dollars and there was no counterweight to that,” said Reed.

The super PAC, called Continue Atlanta’s Progress, has raised nearly $200,000 in the last two weeks alone. About half is from the mayor, the rest is from groups like Coca-Cola, Delta, SunTrust, AGL, and airport concessionaire Hojeij Branded Foods.

The super PAC is backing candidates in eight APS races, two of which are uncontested, and five City Council races. (The endorsements can be found below).

A political fundraising offshoot of Teach for America, a national group with close ties to charter schools, has contributed about $4,300 to four APS candidates as of October 1. And pro-charter school advocates affiliated with D.C.-based Democrats for Education Reform and San Francisco-based KIPP have also donated to school board candidates.

Jeff Dickerson, the spokesman for the Reed-backed super PAC, says charter schools aren’t the issue. Rather, he said the mayor doesn’t want to cede control to outside groups when so many key decisions are ahead, like hiring a new APS superintendent.

“The mayor has made no bones about getting the best superintendent that we can get and I think he’d rather that decision influenced by local individuals and local business people and local taxpayers than people who are not,” said Dickerson.

But the collaboration between Reed and the business community has some unsettled.

“The business community put Beverly Hall in charge and then tried to cover up the cheating scandal and if their judgment was wrong and almost criminal in that instance we shouldn’t be relying on them in this instance,” said Fort.

Harvey Newman, a professor at the Andrew Young School of Policy Studies at Georgia State University, says Atlanta voters may very well push back at the idea of the business community getting involved in APS matters once again. But he said on its face, engagement from business leaders isn’t necessarily a bad thing.

“One of the things that separates Atlanta from some cities that have gone down some really difficult paths – Detroit is the poster child at present – is that Detroit has very little business engagement in its local politics and Atlanta has that business engagement,” said Newman. “So the question that voters have to answer is ‘how much business involvement is enough, how much is too much?’”

Atlanta city elections are next Tuesday.