The Georgia Dome has two seasons: football season, and the second season, which includes soccer, basketball, concerts, graduations, and Dirt – which kicked off last week with Monster Jam and continues this weekend with Supercross. The broadcast version of this story. 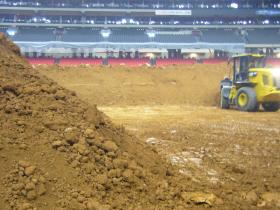 For this event, the 102,000 square foot football field is transformed from green turf into something downright dirty.

To do this, says spokesperson Jason Kirksey, they first have to protect the field.

“Underneath all of the dirt is a tarp, two layers of plywood and a layer of plastic to keep any of the dirt from penetrating down to the actual playing surface. so that’s the first thing we do. our staff comes in and they put all of this protection down and then we start trucking the dirt in.”

They put down nearly 7,000 sheets of plywood.  They truck in some 10,000 tons of dirt. At least 250 truckload loads.  Where do they get it? Kirksey says the Georgia Dome owns it.

“Knowing that we do these events every year, we actually purchased the dirt  numerous years ago, and we have a hole right up the street where we store the dirt. we use the same dirt every year for Monster Jam, Supercross, we’ll use it again this year for stadium supertrucks.”  That’s a new summer event which Kirksey describes as a Monster Truck Race.

“Any event that comes in and wants the dirt, we just go to our hole, dig it up, bring it in, and when its over, we’ll put that Georgia red clay right back in the ground!”

Supercross is like a traveling circus of indoor, off-road motorcycle racing, traveling from city to city with an almost 50-truck entourage of race teams, bikes, apparatus and equipment. All for just one big night.

“For supercross, we will have literally, the track sculpted and the motorcycles will all come in, they’ll set up their camps,” says Kirksey.  ”It’s almost like a Nascar pit row out in the docks.”

The sculpting is done by Rich Winkler and his company DirtWurx, who are subcontracted by Feld Motor sports. It Takes them four days to sculpt the track. They started working on the Dome Tuesday.

“They put the dirt in place with the bucket loaders and then the bulldozers and smaller machines come back afterwards and fine tune it and sculpt it.

Dirtwurx sculpts 16 tracks during Supercross season, each with a different blueprint. Yet there are iconic features in every track: triple jumps-which can launch riders up to 30 feet in the air, Whoopdeedoos- also known as washboards, and “tight rhythm sections and corners,”  which Winkler says, is where the racing really happens.

“The thinking that goes on with us, pre-season when we’re designing the tracks, is how to connect the sort of iconic features with cool rhythm sections and turns that are going to make for areas where they can pass.”

And Georgia’s red clay dirt says Winkler, is a favorite for both crew and riders.

“Actually this red clay in Georgia is a perfect compromise. It’s stiff enough that it looks like it’s supposed to look like and doesn’t blow to pieces when they ride, but it’s got good traction and everybody likes it, the riders, the builders, everybody likes it.”

Once the nearly 70,000 fans pile out of the stadium, clean up will be fast and furious.  It takes just one long day. And by Monday, the show is on the road to St. Louis, and the Dome will begin preparing for a different kind of surface for it’s next big event…The final four Basketball Tournament.

The Georgia Dome will also host Gold Cup Soccer later this year and put in actual grass for the event.