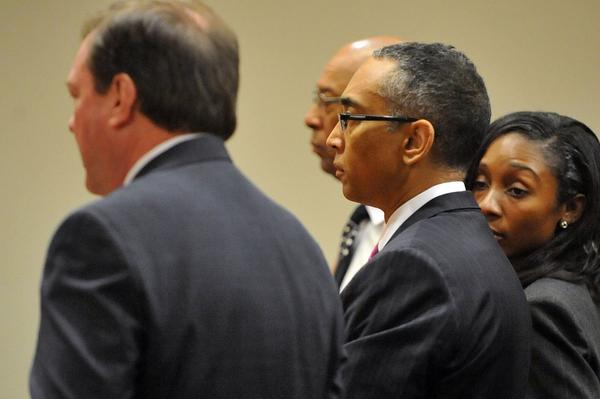 As heard on the radio

In front of a packed courtroom in DeKalb County Superior Court, suspended county CEO Burrell Ellis was sentenced Wednesday to 18 months in prison on charges he tried to strong-arm county vendors for campaign money.

In sentencing Ellis, Superior Court Judge Courtney Johnson said she “struggled” with crafting a sentence because the trial was “unlike any case that I have handled since I took the bench.”

“I do believe you had good intentions for the people of this county when you took office,” Johnson said. “Somewhere along the way your intentions became more focused on your own personal interests rather than the citizens of DeKalb County.”

“I do believe there has been considerable harm inflicted on this county as a result of your actions, but I also do not believe the county is served any better by sentencing you to a long term of prison,” Johnson said.

A jury last week found Ellis guilty of one count of attempted extortion for trying to strong-arm a county vendor for a donation to his 2012 re-election campaign, and three counts of perjury for lying about it to a grand jury investigating corruption in DeKalb. On those charges, Johnson sentenced Ellis to five years of which he must serve 18 months in prison, complete 300 hours of community service and pay $1,000.

Ellis had spent the week prior to the sentence in DeKalb County Jail. He was facing up to 15 years in prison. This was Ellis’ second corruption trial, after the first ended in a mistrial.

Prior to sentencing, Ellis addressed the court to ask for mercy, but he still defended his actions. He told Johnson, “I never once believed that I was committing a crime or that my actions would be interpreted that way.”

“I do apologize to the citizens of DeKalb County,” Ellis added, “and regret if any of my actions have cast this county in a bad light. That was never my intention.”

Ellis’ attorneys also called a series of character witnesses to the stand to ask for leniency. Among them was former Atlanta Mayor and U.N. Ambassador Andrew Young, who asked Johnson for “mercy and understanding.”

“There are more black men in jail right now than there were black men in slavery during the Civil War,” Young told the judge. “We are not that bad. The system was not written for us. It has been for the most part designed to hold us back. Anything you can do to remedy that, not only in this case but throughout your career, you have my prayers and support.”

Ellis’ attorneys have filed papers with the judge indicating they plan to appeal. Until conclusion of the appeals process, Ellis remains suspended from his position as county chief, without pay. Johnson denied Ellis’ request for bond while his case is on appeal.