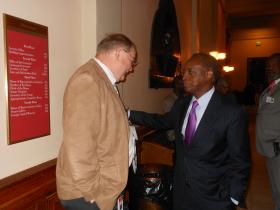 Thurmond spent much of the day at the State Capitol, where he met with members of the DeKalb legislative delegation.  Thurmond promised them he would be the point person when the county’s embattled school board goes before the State Board of Education next week.

That hearing could determine whether the state board recommends that Governor Nathan Deal remove the members of the county board.  DeKalb’s school system is facing a possible loss of its accreditation because of chronic internal board problems, and last week Superintendent Cheryl Atkinson left after just 16 months on the job.

The county board then turned to Thurmond, a former State Labor Commissioner and a former lawmaker who has no previous experience running a school system.  As he made his rounds at the Capitol on Tuesday, Thurmond paused to talk with WABE’s Denis O’Hayer.