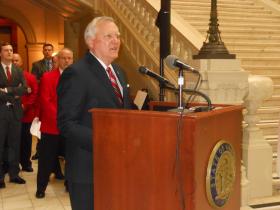 Georgia’s Republican Governor Nathan Deal faces many big decisions in the next few months.  One big one involves whether or not to remove members of the embattled DeKalb County School Board.  The other:  whether or not to expand the state’s Medicaid program, as called for under the new health care reform law.  Interview with Governor Deal

Governor Deal has consistently said he will not expand the state’s Medicaid rolls, but now some other GOP governors have decided to do just that in their states.

After a State Capitol event honoring the state’s firefighters, Governor Deal paused for a quick conversation with WABE’s Denis O’Hayer about both of those big decisions.