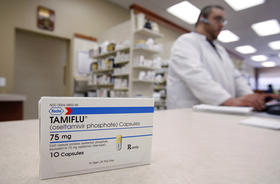 The flu has killed 13 people in Georgia this season, and in the past month, flu cases have increased dramatically.

Some stores are running out of the flu medication Tamiflu, but state officials are saying not to worry.

“It’s not that there is an overwhelming shortage that’s impacting the entire state or certainly not the nation,” said Dr. Patrick O’Neal of the Georgia Department of Public Health.

O’Neal says there are sporadic shortages, but pharmacies usually get more Tamiflu within a few days, and the next pharmacy down the road may have some.

And even though the flu has mutated from what’s in this year’s vaccine, O’Neal says it’s still worth getting the shot.

“Typically the flu that you catch would be milder and of a shorter duration that it would have been had you not had the vaccine,” he said.

For prevention, there’s still the good-old-fashioned hand washing, covering your mouth when you cough or sneeze, and not going to work or school if you’re sick.