Of all the problems facing public schools, one that has stumped educators for years is how to get kids to show up. Truancy, or chronic absenteeism, can be a particular problem in low-income areas. State research shows attendance is tied to achievement. Kids who miss more than six days of school during the year tend to see their academic performance slip.

But Richards Middle School in Gwinnett County seems to have found a way to get kids excited about coming to class.

Going from ‘Not Bad’ to ‘Very Good’

For some kids, middle school can be that awkward space that comes after the comfort of elementary school and before the freedom of high school.

“Middle school was such, such a terrible experience for me, and I did not make good decisions,” says Mark McCain, principal at Richards Middle School. McCain says those regrettable years are probably what propelled him to become a principal. He came to Richards six years ago. At the time, scores on the state’s former reading and math tests, the CRCT, were so-so. 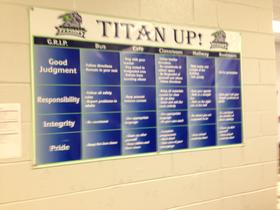 “Our student pass rate was only at, like 72 or 73 percent,” he says. “But the last year we gave the CRCT our sixth grade and eighth grade pass rates were at 89 to 90 percent.”

Richards is a Title I school. That means a high percentage of students come from low-income homes. Title I schools often face challenges, including high suspension rates, low test scores and sagging attendance. Richards doesn’t have those problems.

“I was looking, in fact, at January, and we had a 99 percent attendance rate for our students,” McCain says.

A walk around the school reveals what could be Richards’ secret weapon: a change in school climate, where teachers interact in new ways with students –who want to be there.

Laurethia Cleveland’s eighth-grade math class is reviewing for a test by taking a “gallery walk,” also known as a scavenger hunt, through the halls. Students, like Clifton Williams, make their way down a vast hallway, solving problems posted on the wall every few feet.

Cleveland keeps a close eye on her students’ progress, checking their comprehension as they move through the “gallery” of math problems.

“Tell me what you’re going to do,” she tells a student. “Walk me through what you’re working on.”

Research from America’s Promise Alliance, an organization looking at boosting opportunities for young people, shows positive relationships with adults are critical to keeping kids in school, especially those at risk of dropping out.

“Middle school is a tough time for our kids,” says Felicia Strong, a reading intervention teacher at Richards. Strong is Richards’ 2015 Teacher of the Year.

“Being Title I, we have a lot of kids that deal with a lot of different things,” she says. “So, we have to display the compassion and that care for our students for them to want to be in our classrooms.”

The school’s staff also credits a discipline system the school adopted six years ago for some of the school’s improvements. The program is called Positive Behavioral Interventions and Supports, or PBIS for short. Behaviors are taught and reviewed, like subjects. Students are rewarded for positive behaviors.  Physical education teacher and PBIS Coach Sheree Forrester says students know what’s expected.

“Instead of it being a guessing game – ‘What do I do here? How do they want me to act here?’ – it’s just being consistent and speaking the same language across the board,” she says.

Principal McCain says the program has worked in large part because teachers have embraced it. And achievement at Richards isn’t tied to time spent sitting behind a desk. It’s felt throughout the school, from the seventh-grade guitar class to the sixth-grade English/Language Arts class researching in the media center. In that class, the students were all assigned different historical figures to research for Black History Month.

Nicole Giraldo can’t wait to show off her project. She holds up a poster covered with pictures and facts she’s written about Ruby Bridges.

“She was in the civil rights movement, I guess you could say, but she only did it when she was only about seven years old,” she explains to her classmates.

To McCain, Giraldo is an example of what makes the school successful – kids who are excited to come to class to learn. Despite its Title I status, Richards earned an 83 on the most-recent state report card. It was the highest score of any Gwinnett County Titlel I middle school and almost 10 points higher than the average for all Georgia middle schools.

McCain says his staff worked really hard to make the school a place where kids want to come every day.

“That kind of positive mentality and attitude and framework from the teacher certainly trickles down to our students,” he says.

The rest, he says – high attendance, better test scores, fewer discipline problems – came as a result of those efforts.