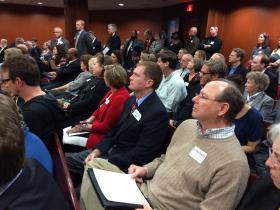 Tension is rising over cityhood efforts in central DeKalb County. It comes as the Georgia House considers three conflicting proposals.

Thursday, after two hours of packed hearings before the House Governmental Affairs Committee, it seemed no one was any closer to agreement.

The communities of Lakeside, Briarcliff, and Tucker all want to incorporate in efforts to gain more control over basic government services. Right now, however, only one has a bill passed through a chamber of the General Assembly – Lakeside. The new city, as called for by Senate Bill 270, would encompass the area just north of Emory University and run well past I-285 to the DeKalb county line.

“I serve these people. They’ve elected me. They want to be in a city. If two-thirds of those people come to you and say we want to be a part of it then you would support it,” said Millar.

But Lakeside opponents say Millar’s claims of widespread support are overstated. They also say Lakeside’s  proposed boundaries are artificial, politically-motivated, and come at the expense of other established communities.

“In my opinion, it’s a deliberate move to secede from areas composed of poorer people and people of color,” said Hillary Ford, a resident of Mason Mill.

Unincorporated DeKalb resident Marjorie Hall Snook called for a halt of all three cityhood campaigns, arguing the focus should be on fixing DeKalb’s existing government.

“Creating new affluent cities in the north part of the county, that is the status quo. We’ve been doing that for 10 years now. Has it made DeKalb better?” said Snook.

Interim DeKalb CEO Lee May has lobbied for a cooling off period, at least until more consensus can be built.

“You have a couple of weeks left in session and I don’t for one see a resolution that gets us to an informed and substantive decision that we can all feel like will be for the betterment of our county,” said May.

Committee chair Amy Carter, R-Valdosta, plans to hold another meeting with all sides next week. At the end of that meeting she said the committee will likely take some type of action.