To hear the on-air version of this story, click the play button above. 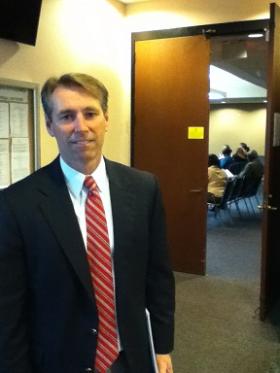 This week, the man who runs Underground Atlanta updated city councilors on the mall’s current state and opened debate about its future. The downtown Atlanta mall has declined over the years. Recently, Underground Atlanta operators unsuccessfully tried to convince elected officials to bring gaming and casinos to the location. But, they still hold hope for Underground Atlanta’s future.

The city of Atlanta owns Underground Atlanta. It is leasing the property to real estate developer Dan O’Leary and his partners. He says there’s 75 years left on the contract. O’Leary leases the mall’s retail spaces to vendors. He says Underground Atlanta currently is 70% filled. O’Leary called Underground Atlanta a “diamond” because it’s across the street from the 5 points MARTA station. But he says it’s “in the rough” because most of it is underground, parking issues, and quality of life issues.

“Those issues range from aggressive panhandling to the homeless issue, which we deal with downtown,” said O’Leary. “Certainly, all those are deterrents.”

O’Leary says the city’s panhandling and homelessness problems make it a lot harder to sell Underground Atlanta to developers.

“If they can go to a market where they don’t have to factor in potential issues like that, that could keep customers away, they automatically look for the easy deal,” said O’Leary.

O’Leary hopes a recently approved ordinance designed to crack down on aggressive panhandling alleviates his problem. At the same time, he’s asking developers, city leaders and others what they want to see in Underground Atlanta.

“Just basically get something quick to eat,” said Sabir.

He doesn’t see much else to do there.

The 3 story mall has a lot of kiosks along with a food court, jewelry repair shops and clothing stores but lacks big name attractions. Sabir would like Underground Atlanta to be more authentic to the South showing non-residents like him iconic Southern culture.

Carlos Weaver says he comes to Underground Atlanta often. The personal trainer from Conover, North Carolina has live in Atlanta for 7 years. Before living in the area, he remembers visiting Underground Atlanta in the 1980s. That’s when he says the area was thriving and attracted many people from various backgrounds.

“I miss those days because you come to Atlanta, you know what I mean, and really have a lot of fun,” said Weaver.