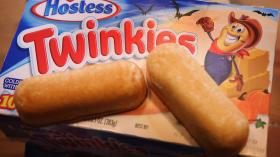 It’s being called “The Sweetest Comeback in the History of Ever.”

Set your calendars.  Twinkies are returning to grocery store shelves on Monday, July 15.

Hostess, which filed for Chapter 11 bankruptcy last year is bringing the golden, cream-filled treats back.

“Now that the decision by Hostess Brands LLC to reopen that factory (in Columbus, GA), now they’ve got more than 200 people that have already been hired and it’s just been a great economic boon to the city,” says Becca Hardin, the executive vice president of economic development for the Chamber of Commerce in Columbus, GA.

Mike Gaymon, the chamber’s president and CEO, is also glad to see the Twinkies return.

Christa Gibson, the manager of a Giant Foods in Columbus won’t be buying a box of Twinkies next week.

“Well, me personally, no.  I’m going to be honest with you, because  I don’t eat sweets.  But my kids, my husband, they love them.”

Gibson does, however, expect sales of Twinkies to be high at her store and others across the country.

Hostess officials say the new Twinkies will have a shelf-life of 45 days … nearly twice as long as the old Twinkies.