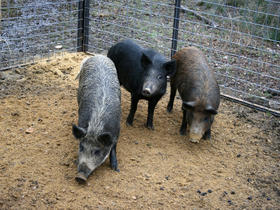 Feral hogs are a problem around the country; they’re like the kudzu of the animal kingdom. They can live pretty much anywhere in Georgia, from the barrier islands to the mountains. And they’ll eat anything they can fit in their mouths, according to UGA ecologist Mike Mengak.

“They’re responsible for upwards of $1.5 billion in [damages] across the United States, according to some estimates,” Mengak says. “And probably in the neighborhood of a few hundred million in Georgia.”

A few years ago, he surveyed landowners just in the southwestern corner of the state. He estimates they’d suffered more than $80 million in damages from the hogs. Now, he’s sending out a questionnaire to 3,000 people statewide in order to learn where feral hogs live, how much damage they’re doing and how people feel about them.

“They’re very adaptable, they’re very hardy, they have a very high reproductive rate,” he says. “And those ecological traits combine together to make them a destructive, fast growing, wide-ranging pest.”

Mengak says most feral hogs are 150-200 pounds, though there are occasionally stories of much larger ones.

They’re not exactly a new problem. Mengak says people left farm pigs behind when they left their land during the Great Depression. But it may go back further than that to Spanish explorer Hernando De Soto, who came through the Southeast in the 1500s.

Have a hog problem? Mengak says intensive trapping is the best solution. Eradicating an entire group of sows and their piglets also works, but hunting doesn’t help. “It typically takes one or two pigs and the others run away, and then they’re much harder to find later on.”