In Georgia, Republicans had far more statewide primary runoffs than Democrats. With those runoffs behind the GOP, the party is now campaigning as a ticket. At the top of that ticket is U.S. Senate nominee David Perdue. He’s running against Democrat Michelle Nunn. Perdue Saturday campaigned in 5 metro Atlanta cities including Marietta.Click 'listen” to hear the radio story 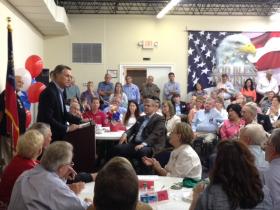 Around 150 people attended the breakfast fundraiser in Cobb County’s GOP headquarters. Governor Nathan Deal, along with almost all of the Republican candidates for statewide office, each campaigned on the economy and education. Another theme which Senate candidate David Perdue emphasized was tying Democrats, such as his opponent Michelle Nunn, to what Republicans say are the failures of the Obama administration

“One is to make sure their kids get a world class education here in the state. The other thing at the end of the day pocketbook issues. The middle class has been shrinking rapidly over the last 10 years. Those are the issues people want to hear about”.

The Democrats will hold their state convention next Saturday in Dublin, Georgia. Perdue campaigns this afternoon in Perry, Georgia. The election is in November